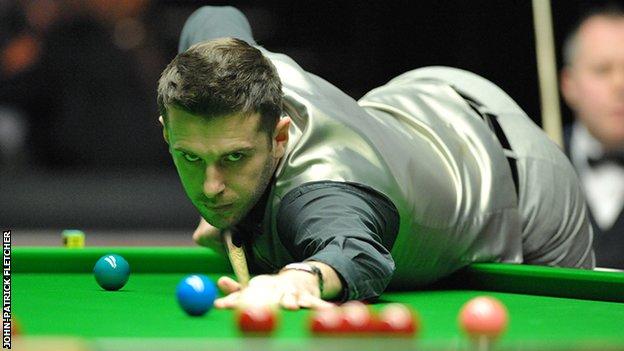 Defending champion Mark Selby is through to the Masters semi-finals after a thrilling 6-5 win against John Higgins at Alexandra Palace in London.

Selby, the number one seed, took an early 3-1 lead before the Scotsman won four consecutive frames to go 5-3 up.

But Selby, 30, fought back to 5-5 before winning a tense deciding frame.

In the last four, Selby will meet fellow Englishman Shaun Murphy, who came from three frames down to beat Marco Fu 6-4.

Both quarter-finals saw impressive comebacks, with Higgins and Selby taking the initiative several times in an engrossing duel.

Higgins won the first frame with 104 unanswered points, including a break of 58, before Selby took the next three frames, helped by breaks of 70 and 98.

It was then the turn of Higgins, who has slipped to 12th in the world rankings, to find some momentum.

He won four consecutive frames, including a tightly-contested seventh frame, when he miscalculated and thought he did not need to pot the black to guarantee victory. Despite that, he potted the final ball to avoid a re-spotted black.

The up-and-down nature of the match continued, with Selby capitalising on a poor Higgins break in the ninth, before winning a tense, error-strewn 10th frame to force a decider.

Selby had never lost any of his 11 final-frame deciders at the Masters but went close several times against a determined Higgins, and the scores were at 69-69 with three balls remaining.

But Selby doubled back off the cushion to pot an excellent blue into the middle pocket and then added the pink to win the match and keep alive his hopes of a fourth Masters title in seven years.

In the earlier session, Murphy reached his third consecutive Masters semi-final despite trailing 3-0 and 4-1 against Fu.

An 86 break in the sixth frame started the comeback and he produced a break of 117 in the eighth to draw level.

Murphy overcame a 34-point deficit in the ninth frame and then won a tense 10th to clinch victory.

He said afterwards: "I've come here in no form at all and feel like I'm on a bonus now."

If Murphy does win the tournament, he will become only the ninth player to complete snooker's Triple Crown.