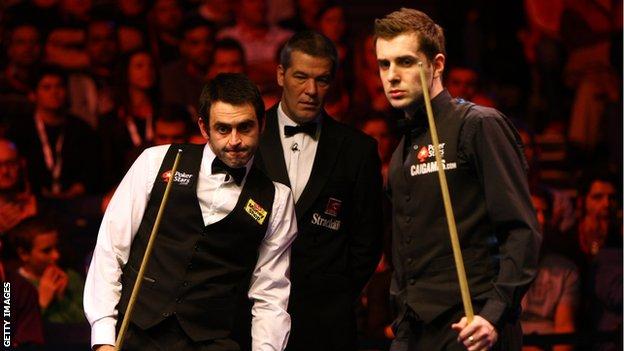 Ronnie O'Sullivan set up a Masters final reunion with defending champion Mark Selby after they both enjoyed easy victories at London's Alexandra Palace.

O'Sullivan beat Stephen Maguire 6-2 after Selby defeated Shaun Murphy 6-1 to set up Sunday's final, which is a repeat of the 2009 and 2010 finals.

O'Sullivan is chasing his fifth title while world number two Selby is aiming to win a fourth Masters in seven years.

"He is a tough competitor - he's made of metal," O'Sullivan said of Selby.

"But you have to find a way of breaking through and staying focused.

"It's a bit like playing Andy Murray because you know you're going to have to play a lot of shots to get in sometimes, and it's about having that patience and mindset.

"You have to beat all sorts of players and Mark is going to make it very difficult for me.

"This is the final of the Masters and you have to enjoy occasions like this."

O'Sullivan raced through his semi-final after Maguire won the opening frame with a 98 break, taking the next five frames.

Maguire pulled one back but world champion O'Sullivan secured his 10th Masters final appearance with a 129 break in the eighth frame.

Selby was equally dominant in the earlier match, storming into a 5-0 lead after winning the opening two frames with breaks of 86 and 104.

Murphy avoided the whitewash by winning the sixth frame, but Selby closed out the victory to reach the final once again.

"Before the interval I thought I played quite well and I shut Shaun out apart from the fourth frame, which I thought he had a chance to win," said Selby.

Selby's victory means he will compete in his fifth final in seven years, having won last year's trophy with a 10-6 triumph over Neil Robertson.

"Just lately I have not been taking my chances and not been as clinical as I have in the past," admitted Selby.

"That was probably because I had doubts and I was listening to too many people, but I have stuck with what I do."