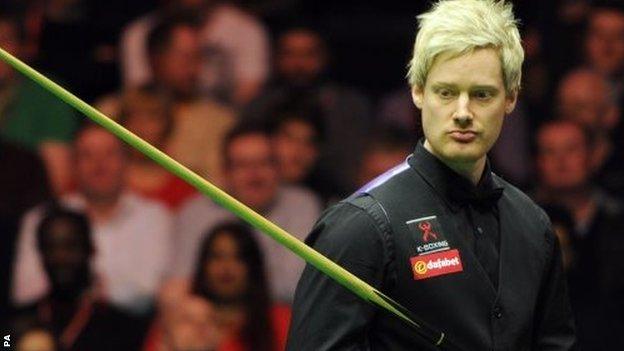 World number one Robertson was beaten 5-1 by China's's Tian Pengfei, who is ranked 61 places below him, while Selby lost 5-3 to Norway's Kurt Maflin.

Tian won the first three frames with breaks of 91, 75 and 57 and added the fourth in the pre-interval session.

Robertson made 89 to take a frame back, but lost the next.

Tian was reaching the last 32 of a ranking tournament for the first time to start his Chinese New Year celebrations a day early.

Maflin made only one break over 50 but was able to grind down Selby, who made a 113 run in frame three, but generally struggled.

Judd Trump followed up his 5-1 first-round win over Noppon Saengkham earlier in the day by beating Mark King 5-0 in the evening.

Trump made two centuries in his first match and a top break of 88 against King, who had earlier edged out Dave Harold 5-4 in round one.