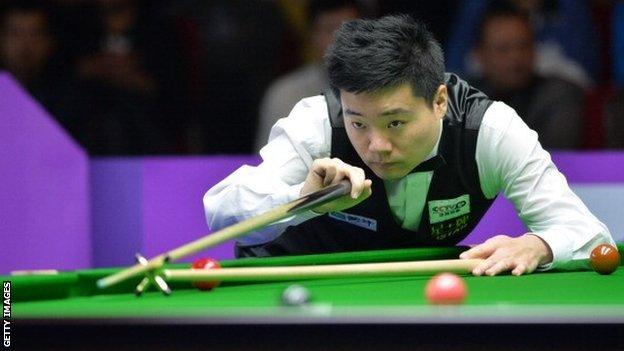 Ding Junhui and Judd Trump will contest Sunday's final of the German Masters.

China's Ding survived a nervy finale to edge out Welshman Ryan Day in his semi-final, eventually prevailing 6-5 after squandering a 5-3 lead in Berlin.

"I have to win on Sunday, no matter how I play," said Trump. "Ding is the man to beat. He's more consistent than me."

Ding, 26, has already won the Shanghai Masters,Indian Open and International Championship this season and is bidding to become the first player to win four ranking titles in a campaign since Stephen Hendry in 1990-91.

"I would be very proud to win a fourth ranking title in one season, because it's so difficult now just to get to a final," he said. "Judd didn't start the season well but now he's dangerous."

A break of 121 put Ding 5-3 up yet Day, aiming for a first ranking final since the 2008 Grand Prix, responded to force a decider and even spurned an opportunity to snatch victory before a run of 79 from the world number three sealed his place in the final.

Lawler, meanwhile, took the opening frame with a break of 61 only for Trump to seize control and reel off six successive frames, including breaks of 127, 122 and 117.

"I thought Rod might be nervous but he made a very good break to win the first frame," said Trump, who will contest his first final since the 2012 International Championship. "He is under-rated and people thought I would win easily.

"He didn't do much wrong, I just played well. I think I have played the best snooker this week. The easy job is done, but the final will be different.

"It has been frustrating over the last couple of years. I lost confidence and my thinking was negative. But everyone has bad spells and you have to be patient."