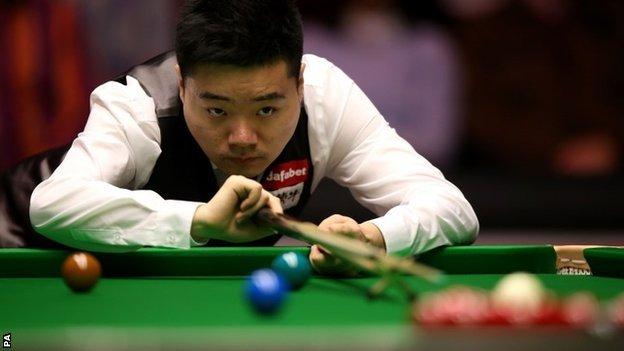 Ding Junhui became the first player since Stephen Hendry in 1990-91 to win four ranking titles in a single season with a 9-5 victory over Judd Trump in the German Masters final.

The Chinese, 26, twice recovered from being two frames down to go into the mid-session interval at 4-4.

Ding then rattled off five of the next six frames to seal victory in Berlin.

It is the 10th ranking title of his career, which moves him ahead of Neil Robertson, Peter Ebdon and John Parrott and into sixth place on the all-time list, level with Jimmy White.

Trump, who was playing in his first ranking final since the 2012 International Championship, had conceded just four frames in five matches on his way to the final.

The Englishman, 24, won the opener with a break of 80, before Ding made 87 to level the scores.

World number four Trump won the next two, and though Ding made a break of 76 in the next to take the frame, Trump immediately restored his two-frame advantage.

Ding capitalised on a missed red from Trump to win the next and then levelled the match again with a break of 81.

It was one-way traffic after the interval, as Ding made back-to-back centuries and scored 460 unanswered points on his way to a three-frame lead.

The world number three made a 39 clearance after Trump played a poor safety shot to move within one frame of victory.

And though Trump ended a run of six losing frames in the next, Ding won the 14th to secure his first German Masters title.