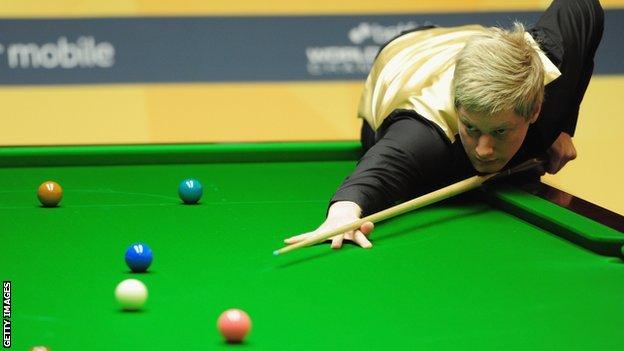 World number one Neil Robertson thrashed Rory McLeod 4-0 to reach the third round of the Welsh Open.

The Australian made 57 to win the first frame, then took the next two after McLeod failed to take his chances.

Robertson finished in style with a break of 104 - his 87th century of the season - and will now face two-time champion Mark Williams after he beat Tian Pengfei 4-0.

Ronnie O'Sullivan also cruised through with a 4-1 win over Barry Pinches.

Welshman Williams took the opening frame with a run of 63 but Tian should have levelled the scores only to miss the brown, which let his opponent in to double his lead before making it 4-0 with runs of 77 and 108.

Reigning world champion O'Sullivan fell just short of a record-breaking maximum break as he set up a last 32 clash with China's Xiao Guodong.

O'Sullivan made 104 in five minutes during the opening frame but missed the 14th red, which rattled around the jaws, and the chance of a 147 was gone.

Shaun Murphy also progressed after breaks of 66 and 55 in his 4-2 win over Craig Steadman while world number five Barry Hawkins progressed with a 4-3 defeat of Cao Yupeng.