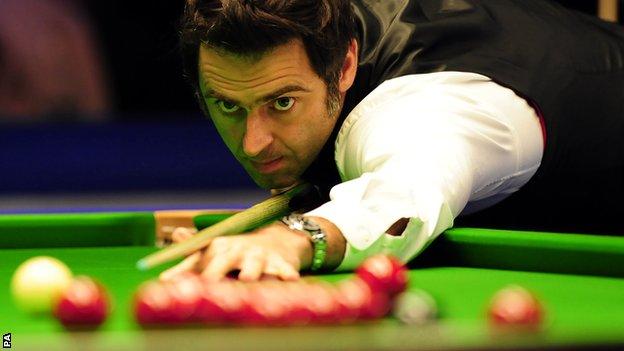 Ronnie O'Sullivan eased past Ricky Walden 4-1 to move into the last eight of the Welsh Open, where he will meet John Higgins.

Mark Selby and Joe Perry also won to set up a last-eight meeting.

And as the last 16 drew to a close Wales' Mark Williams lost 4-2 to Marco Fu while Barry Hawkins beat Liang Wenbo 4-2 at Newport Centre.

Fu and Hawkins will now meet in the last eight.

O'Sullivan hit a 103 break in moving 3-0 up and although Walden replied with an 88, the two-time champion closed out the win a frame later with an 86 break.

Walden defeated O'Sullivan 10-8 in the Shanghai Masters final in 2008 to capture his first ranking title victory.

The pair last met in the semi-final of the Masters in January, when "The Rocket" produced a stunning performance to win 6-0 in 58 minutes.

He also set a new snooker record of 556 points without reply in that match, a display described at the time by BBC pundit Ken Doherty as "probably the best performance I have seen from anybody in all the years I've been coming to the Masters".

Walker, who turned professional in 2012, has never progressed past the second round of a ranking event, but continued his run in Newport by grinding out a victory over Scot Maguire.