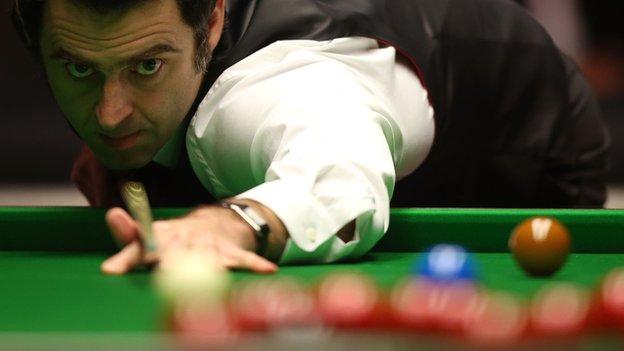 World champion Ronnie O'Sullivan eased past John Higgins 5-1 to reach the semi-final of the Welsh Open.

The world champion, 38, notched a century break on the way to a 2-0 lead and, after Higgins responded, took the next three frames to win.

"I am pleased to get the win against someone of his quality. It doesn't get any better than John," said O'Sullivan.

He added: "I struggled in my first three games, but I cued well against Ricky Walden in the last round.

"Today, I wasn't really seeing it well, but because I am into the tournament I am feeling a bit sharper.

"John hasn't been playing his best and if you are struggling at this game, anything is missable, even for the greatest."

China's Ding - the season's star man - survived a scare, coming back from 4-2 down to beat Joel Walker 5-4.

The 26-year-old has won four ranking titles this season and needed to make back-to-back century breaks in the last two frames to go through and end Sheffield teenager Walker's superb run.

English pair Hawkins and Perry both claimed impressive victories as they sealed their semi-finals spots.

Perry caused an upset with a 5-1 win over Selby, the world number two and 2008 Welsh Open champion.

"I am absolutely delighted," said the 39-year-old after his victory. "Mark is a proven winner and has won the big tournaments, he's a fantastic player. It is always a scalp to beat someone ranked so highly."

World finalist Hawkins swept aside Marco Fu 5-0 to set up his meeting with O'Sullivan, in a triumph that included breaks of 134 and 125.

"It doesn't get any easier playing Ronnie," Hawkins said. "I am looking forward to it, it will be a great occasion with a big crowd. It is always special when you play Ronnie and I hope I can get one over on him."