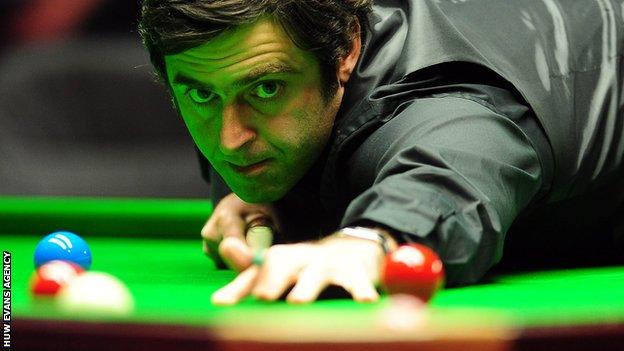 Hawkins made only a handful of errors but 38-year-old Englishman O'Sullivan, chasing his third Welsh Open crown, was ruthless and made three centuries.

Ding, 26, has the chance to win his fifth ranking title of the season after a 6-4 victory over Joe Perry.

The duo will meet in Sunday's final, with the first to nine frames taking the £60,000 top prize

Hawkins started his semi-final with O'Sullivan, who beat him in last year's World Championship final, with a 102 clearance.

And Hawkins could have doubled his lead but missed at 58-0 in the second, allowing O'Sullivan to clear with 67.

A run of 114 put O'Sullivan ahead and he took a scrappy fourth frame on the colours to lead 3-1.

O'Sullivan extended his lead with a break of 124 and came from 64-0 down in frame six to win it on the black with an astonishing 65 clearance, pulling off a series of superb pots.

Hawkins pulled one back with a run of 67, becoming the first player in the tournament to win two frames against O'Sullivan, who wrapped up the match with a 103.

Earlier, a break of 51 gave Englishman Perry the opener but Ding hit back to win the next three frames, including a break of 114.

Perry fought back to level the match at 3-3 but saw his opponent make an 88 clearance in the seventh frame.

They shared the next two frames before Ding's 118 secured his place in the final.

The Chinese player has already won the Shanghai Masters,Indian Open,International Championship and German Masters this season and has lost just once at a ranking event since June.

If he wins on Sunday, he will match Stephen Hendry's record of five ranking titles from the 1990-91 season.