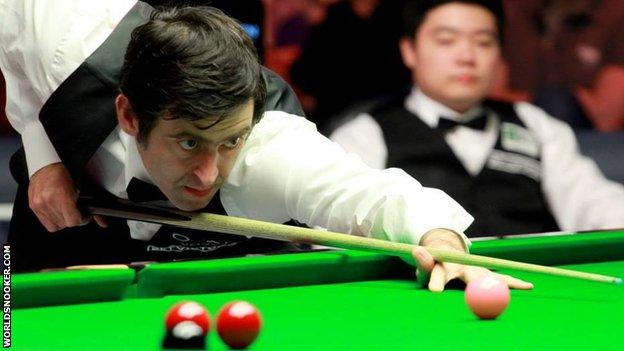 World champion Ronnie O'Sullivan made a maximum 147 break in the final frame to wrap up a commanding 9-3 victory over Ding Junhui in the Welsh Open final.

O'Sullivan controlled the match from the first frame, opening up a 3-0 lead before Ding got off the mark.

Benefiting from errors from his Chinese opponent, the Englishman moved 7-1 ahead at the end of the first session.

Ding reduced the arrears with breaks of 109 and 121, but O'Sullivan clinched victory with the two frames he needed.

The final frame was a fitting end to a match in which O'Sullivan led from the start as he took his first major ranking event title of the season, although he had also won the non-ranking Masters and Champion of Champions competitions.

He made his 12th career maximum to seal his third Welsh Open victory, potting the final black left-handed after he had played right-handed throughout most of the break.

"I thought on about 48 the maximum was on. I looked at the scoreboard and saw it was all blacks," said O'Sullivan.

"I have made 11 [maximums] right handed, so this counts as a left-handed 147. I couldn't have got on the final black any better.

"Once I start slowing down, I hope Ding dominates. He plays the game as it should and people should enjoy him."

The 38-year-old claimed the 26th ranking title of his career and moves into third place on his own for all-time winners, behind Stephen Hendry (35) and Steve Davis (28).

Ding, who was looking for a record-equalling fifth ranking win of the season, said: "Ronnie plays very good all the time and I watched his matches when I was little.

"I enjoyed it and it was a nice 147 for him. I learnt as much as I could in this final and hopefully I can be better next time."

Heading into the contest, the 26-year-old from China had won 39 of his previous 41 ranking matches, losing only to Joe Perry at the Wuxi Classic and Ricky Walden in the UK Championship.

And when Ding faced O'Sullivan in the 2007 Masters final, a young Ding was reduced to tears and offered to quit the match at the interval.

But, despite suffering another heavy defeat, there was no repeat of a resignation this time, as 'The Rocket' showcased his break-building brilliance and calm temperament in Newport.