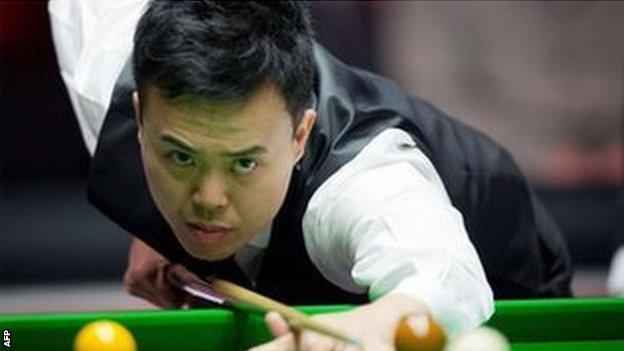 World number one Neil Robertson was beaten by Marco Fu on a re-spotted black in the deciding frame of their Haikou World Open last-16 match.

Robertson needed just pink to reach the quarter-finals, but the Australian missed the penultimate ball.

Fu levelled before potting the black again to seal a 5-4 win and land a last-eight clash against Mark Joyce.

John Higgins staged a remarkable comeback against Judd Trump, winning 5-4 after being 4-0 down.

But the Scot returned after the mid-session interval to make 104, 89, 90, 124 and 63 for a stunning victory. He will face defending champion Mark Allen, who eased past Ricky Walden 5-2.

World number two Mark Selby faces Alan McManus in the quarter-finals after both men sailed through 5-1.

Selby, from Leicester, eased past over China's Liang Wenbo, while Glaswegian veteran McManus beat Welshman Dominic Dale in the ranking event based in China.