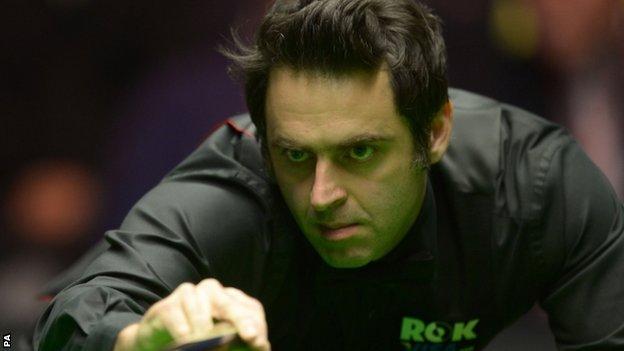 Ronnie O'Sullivan easily came through his opening match as he launched his defence of the Players' Championship Grand Final in Preston.

"I got off to a good start and I think that put a little pressure on Scott," he told World Snooker's website.

After beating Scotland's Donaldson, the reigning Masters and Welsh Open champion added: "I feel a little bit rusty, but each match I played in the Masters and the Welsh I got more into it, so I'd rather be underplayed than overplayed.

"I still feel like I'm a little way off sharpness but as long as I can win my first match and my second match then it should click in. I'll gather momentum and get sharper as the tournament goes on."

O'Sullivan avoided a repeat of the first-round exits suffered by world number one Neil Robertson and Shanghai Masters champion Ding Junhui in this year's event, which is the culmination of a number of qualifying events throughout the season. Mark Selby joined the list of big-name casualties, losing 4-0 to world number 36 Dave Gilbert.

A total of 32 players started the five-day tournament, with £100,000 going to the man who wins Saturday's final.