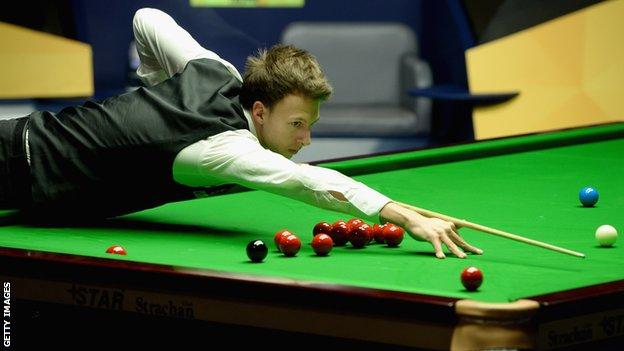 World number six Judd Trump came from behind to beat Joe Perry 4-2 and reach the last four of the Players' Championship Grand Final in Preston.

England's Perry had taken a 2-1 lead with breaks of 133 and 121 but lost the next three frames to a resurgent Trump.

The 40-year-old Northern Irishman booked his spot in the last four by defeating top seed Mark Allen 4-2 earlier on Friday.

"A lot of the top players have gone out but Barry Hawkins is playing probably the best he's ever played at the moment, people still underestimate him."

China's Yu, 26, produced the shock of the tournament by beating world champion Ronnie O'Sullivan in the previous round, but despite levelling at 1-1 was unable to find similar form against Hawkins, 34.

Higgins, 38, scored a century break to bring the score back to 1-2 against 36-year-old Fu but then failed to score another point in the match.

"When Marco gets into a groove he is very solid and a great positional player," said Higgins. "I still felt good all the way through, I just missed a couple of balls at the wrong moments."