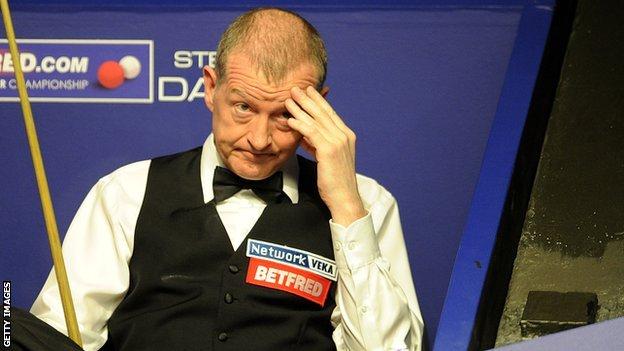 Steve Davis could retain his place in snooker's elite after World Snooker chairman Barry Hearn said he may be offered a tour wild card.

The six-time world champion, 56, dropped out of the top 64 after defeat in the World Championship qualifiers.

It is unclear whether Davis will play in the tour's qualifying school, but Hearn may offer a one-off tour card.

"I've got to be flexible when common sense comes into play and it's causing me sleepless nights," Hearn said.

Hearn has always insisted snooker should be a meritocracy but accepts that he is considering exemptions for Davis and six-time World Championship finalist Jimmy White.

"It's a tough call because you don't want to make a precedent," he told BBC Radio 5 live.

Hearn is a former agent of Davis and says others would have to make the call on whether his long-time friend should be invited back.

"Steve's my best mate so straight away I can't vote, I'm biased," he said.

BBC Sport commentator Davis, beaten 10-8 by Craig Steadman in this year's qualifiers, turned professional in 1978 and won his world titles between 1981 and 1989. He last made the quarter-finals in 2010.