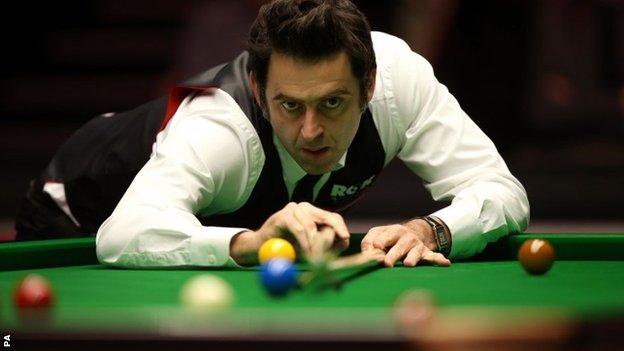 Ronnie O'Sullivan admits he may not have the motivation to equal Stephen Hendry's record of seven World Championship titles.

The 38-year-old starts the defence of his World Championship crown against Robin Hull in Sheffield on Saturday.

His five titles are one fewer than Steve Davis and Ray Reardon. Hendry's seven is the highest in recent times.

"That record is something that if it happens, it happens, but I'm not sure I have the motivation," said O'Sullivan.

O'Sullivan, also champion in 2001, 2004 and 2008, is favourite to triumph again this year, but admitted matching Hendry's record is not something that motivates him at this stage in his career.

"Sometimes I ask myself if I was lying in hospital with a couple of days to live, would I say 'I wish I had won seven or eight world titles?'" he told BBC Sport.

"When I think of it like that, I probably think it is not the most important thing in life.

"I try not to get sucked into trying to equal Stephen Hendry's record or even break it. For me it is about enjoying my life and what is important is having a good time while I'm here.

"I don't want to play snooker forever. I've got to the point where I do not enjoy practising but I do it because I want to do myself justice when I'm out there."

He added: "I think I have already got my bit of history in the game. I could win some more, that would be great, but I am just happy being here having won five world titles."

O'Sullivan admitted that breaking Hendry's record would be "asking a lot".

He told Eurosport: "I can't put myself in that league just yet. I'm not saying it can't happen because you never know.

"But I don't want to put unrealistic targets on myself, or unnecessary pressure. I can't expect to win another three going into my 40s when nobody has won more than one beyond the age of 31 over the past 40 years, apart from me and John Higgins."

Ding Junhui, who is aiming for a record-breaking sixth ranking title win of this season, opens his campaign against Crucible debutant Michael Wasley on Sunday.

And world number one Neil Robertson, bidding to regain the title he won in 2010, also faces a Crucible newcomer in Wallasey's Robbie Williams, starting on Monday.