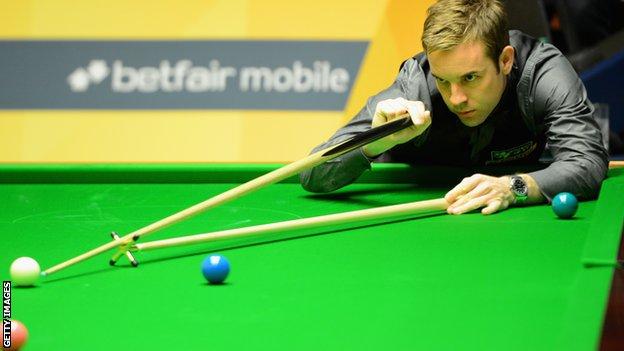 Ali Carter saw off the challenge of World Championship debutant Xiao Guodong to progress to the second round at the Crucible Theatre in Sheffield.

Xiao threatened to cause an upset with the match tied at 8-8 but Carter seized the initiative with a break of 80 and held his nerve in the final frame.

"I went out there with a game plan to try and attack and at 4-1 in front I was cruising and felt good," said Carter, 34.

"It cost me in the first session as for all the money in the world it looked like I was going to be 7-2 up, but then to get out 5-4 ahead in the end, I felt like I'd had a result.

"He played well and didn't look like he was under any pressure at any time. The clearance he made to go to 8-8 was massive - but all credit to me for making the 80 break and playing a granite last frame there to win it."

Ryan Day earned a 10-9 win over Scotland's world number nine Stephen Maguire, who fought back from 6-9 down to force a 19th frame. Welshman Day will face Judd Trump or Tom Ford in the last 16.

Shaun Murphy,world champion in 2005, overturned a 4-5 deficit at the interval to beat 28-year-old Jamie Cope 10-9 and set up a second-round meeting with Marco Fu or Martin Gould.

Earlier, 1997 champion Ken Doherty progressed to the second round for the first time in eight years with a 10-5 victory over sixth seed Stuart Bingham.

China's Ding Junhui scored the highest break of the tournament so far with a 136 as he built a 6-3 lead against England's Michael Wasley in a match that resumes at 14:30 BST on Monday.