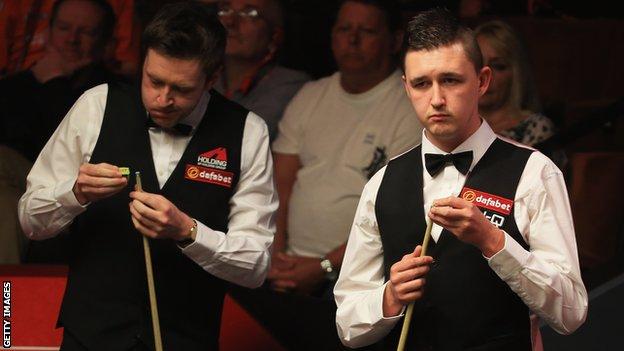 Kyren Wilson said he loved everything about his World Championship debut and is convinced he will be a success at the Crucible in years to come.

Wilson, the world number 89, lost to Ricky Walden in a gruelling 10-7 match.

The 22-year-old Kettering potter was edged out in a 73-minute final frame by the world number 10.

Wilson is one of four Crucible debutants at this year's World Championship.

"I have loved every minute of it; the attention, the crowd and the buzz all my family and friends have got. I can't wait to get back here," Wilson said.

"It's not as daunting as it looks on TV. I was so nervous and scared coming in. But I settled really well and I think I will do well in the future."

Wilson was an animated figure throughout a topsy-turvy game, playing to the crowd and clearly enjoying the attention.

Wilson, who is in his first season back on the tour after a two-year absence, said that he might even have paid the price for enjoying himself too much.

"It was an up-and-down game all through," he added. "I started off well and got 3-1 up but I think I was too relaxed in the first session and didn't expect it and Ricky punished me for that.

"In the second session I got myself really up for it and was really nervous which was a nice feeling because I think that's when I play my better stuff. I was proud of myself and glad I made a game of it."

But he has no intention of cutting out the fun factor.

"It's a show," Wilson added. "People pay good money to come and watch us play so I want to put on a show and entertain people.

"If that means me making a fool of myself then so be it. I enjoyed myself. It was my debut and hopefully I will be here a lot more."