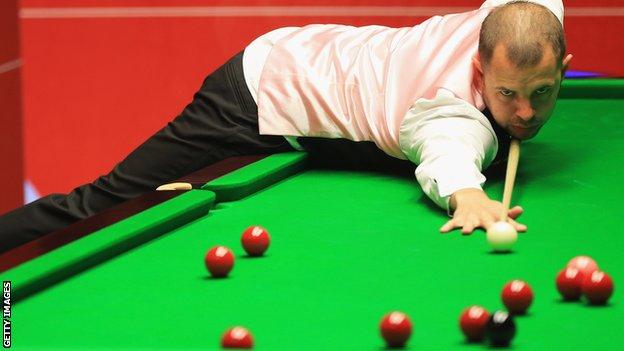 Last year's runner-up Barry Hawkins was thrilled with the way he recovered from a nervy start to cruise into the second round of the World Championship.

The world number four won the final eight frames in a 10-4 victory over qualifier David Gilbert to secure a last-16 meeting with Ricky Walden.

"I struggled early on and felt a bit all over the place," Hawkins, 35, said.

"But I stuck with it, finished off strongly in the first session and played pretty well today."

He added: "I was quite confident coming in today but knew I had to play well and I did that.

"I am delighted to get through and feel like I am in the tournament now."

Hawkins had never been beyond the second round in seven attempts at the Crucible until his run to the final last year, losing eventually to Ronnie O'Sullivan.

And the London-born, Kent-based player said that helped him settle when his match against Gilbert was in the balance at 4-2 down.

I don't think you are human if you don't get butterflies going out there. There is so much that comes with this tournament.

"I was nervous and was struggling to settle," Hawkins admitted. "But the longer you are out there the easier it is - and the experience last year helped. I tried to stay calm and managed to get my game together."

However, Hawkins said experience will never completely eradicate the edginess that comes from playing in snooker's showpiece event.

He added: "I don't think you are human if you don't get butterflies going out there. There is so much that comes with this tournament.

"Everyone is desperate to do well in it. You just want to perform well and you put so much pressure on yourself, perhaps too much - instead of just going out there and playing.

"That's what I did at the start but I managed to relax and then started cueing a lot better."

Hawkins, who turned 35 on Wednesday, is now relishing the chance to play Walden in a repeat of last year's Crucible semi-final.

"I forgot it was my birthday," he said. "It's a nice little present.

"This morning I got a few texts and opened my cards but I forgot all about it because of the match so I will go for a nice birthday meal, and celebrate a little bit.

"I just hope it's the same result against Ricky. He is a great player and I class him as a good friend.

"Hopefully it will be free-flowing, not too much tactical stuff, and better quality than the semi-final we played last year. I am looking forward to it."