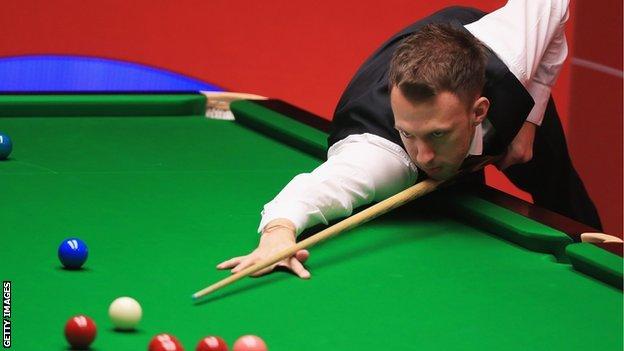 Judd Trump admitted he was "relieved" after scraping through the first round of the World Championship in Sheffield.

The thing for me is not to get too disheartened

"In the last frame, I potted a good yellow and green to win, but other than that I didn't do a lot right in the whole game," Trump, 24, told BBC Sport.

Australian Robertson is seeded to meet five-time champion Ronnie O'Sullivan in the final should they both progress. His first-round match continues to a finish on Thursday evening.

Fu saw off Martin Gould 10-7 to set up a meeting with 2005 champion Shaun Murphy, while Welshman Dominic Dale built a 7-2 advantage over the 13th seed, England's Mark Davis.

Trump, the 2011 runner-up and 2013 semi-finalist from Bristol, struggled for form even when he was on top, and became increasingly frustrated as the game wore on.

"I just got really bored and started to take everything on. If I had carried on playing how I was, then he would have won. At 8-8, he had quite a few chances and when I got in I didn't feel comfortable at all."

But Trump said he would not worry about his form on his fifth Crucible appearance, as long as he keeps on winning.