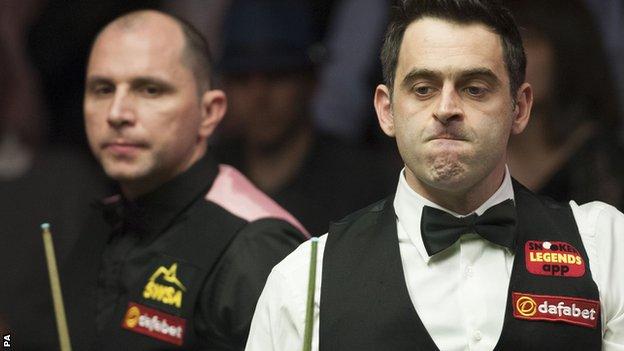 Ronnie O'Sullivan trails Joe Perry 5-3 after the first session of their second-round match at the World Snooker Championship in Sheffield.

O'Sullivan, the defending champion, was never ahead in the opening stages in the best-of-25 match.

Perry took the first frame of the night and at one point led 4-1.

His fellow Englishman, seeking his sixth world title, responded with a break of 116, but Perry ended the evening with a 99 break.

Perry's lead was reduced to 4-3 when O'Sullivan, aiming to become world champion for third successive year, knocked in a run of 75 to take the seventh, but Perry will resume on Friday at 14:00 BST with a two-frame lead.

Evening action on the other table at the Crucible ended early when world number one Neil Robertson quickly claimed the two frames he needed to wrap up a 10-2 win over Robbie Williams.

The Australian, the 2010 world champion, recorded the highest break of the tournament with a clearance of 140.

Mark Selby leads Ali Carter 5-3 after the first session of their second-round match.

Selby led by four frames at one point, but Carter fought back towards the end of the session.

Carter took the first and eighth frames with breaks of 102 and 110, but in between Selby took the lead with four consecutive frames.

Selby could only watch as Carter made his good start, but the 2007 runner-up found his form to move into a 5-1 lead, which included claiming the fourth frame on a re-spotted black after the scores were tied at 62-62.

Carter, the losing finalist to O'Sullivan in 2008 and 2012, had cut a frustrated figure as Selby moved ahead but recovered his composure to reduce the arrears. The match resumes at 10:00 BST on Friday.

Meanwhile, Dominic Dale held on to his lead to beat Mark Davis 10-5 in round one.

Dale had led Davis 7-2 overnight, and the win, his first at the Crucible since 2000, sets up a second-round match against debutant Michael Wasley, who defeated world number two Ding Junhui in round one.