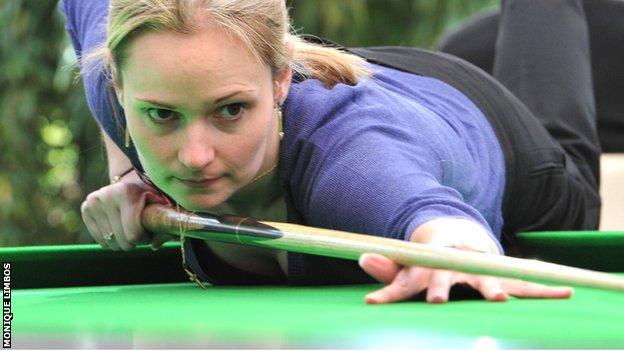 Steve Davis does not expect to ever see a woman compete in the final stages of the World Snooker Championship.

The six-time world champion, 56, believes the "obsessive" nature of men for an "absolutely irrelevant" activity gives them an advantage.

"The male of the species has got a single-minded, obsessional type of brain that I don't think so many females have," he told BBC World Service's Sports Hour.

Leading women's player Reanne Evans agreed that focusing solely on the game, given other priorities and a lack of financial support, is hard.

"I think women find it difficult just to concentrate on snooker," said the 28-year-old, who has a seven-year-old daughter. "I've got my little girl and you're always thinking about them.

"I just think maybe men find it easier to focus on one thing at one time. Maybe that's a slight advantage there.

"The men's game has the backing behind them that they can afford to have a part-time job, or no job, and just practise and work at the snooker, whereas there's no money in the women's game whatsoever."

There are currently no professional women snooker players, despite top-tier competitions being open to both genders.

Evans, who has won the Ladies World Championship for 10 successive years since 2005, was handed a wildcard to the World Snooker Tour for the 2010-11 season, but failed to win a match.

She did, however, become the first female to reach the main stages of a ranking event last June by beating Thai player Thepchaiyah Un-Nooh in qualifying for the Wuxi Classic.

While Evans dominates the women's game with an average break of around 40, she admits her level is still some way off the top male players.

World number one Neil Robertson became the first player to record 100 centuries in the same season during his quarter-final victory over Judd Trump at the Crucible on Wednesday.

Davis thinks women lack "that single minded determination in something that must be said is a complete waste of time - trying to put snooker balls into pockets with a pointed stick.

"Men are ideally suited to doing something as absolutely irrelevant in life as that," he said. "They're the ones who have train sets in the loft. They have stamp collections to die for. Right? These are stupid things to do with your life. As is trying to practise eight hours a day to get to World Championship level.

"So therefore I think we are also the idiots of the species as well. The male of the species has got a single-minded, obsessional type of brain that I don't think so many females have."

Asked if he thought a woman would ever compete in the latter stages of the World Championship, the BBC commentator replied: "No."

Evans was seven-and-a-half months pregnant with her daughter, Lauren, when she won the ladies world title in 2006.

"The trophy just about fitted on my bump," she recalled. "I could only just about break off. It was very weird playing with a bump."

Later this month, the mother-of-one from Dudley in the West Midlands will take part in World Snooker's Q School in an attempt to qualify as a professional.

These days we're a fast moving sport. The opportunity is there for girls to play

She believes mental strength rather than physical power is the key factor which sets men apart from the women.

"It can be an advantage if you have cue power but there are a lot of men out there who haven't got a lot of cue power, like [Hong Kong's world ranked number seven] Marco Fu compared to [world number five] Shaun Murphy," she added.

"But it's not a physical sport like football, rugby or boxing. So that's why I think one day we could see women playing at the Crucible."

The World Professional Billiards and Snooker Association, the sport's governing body, says there are no barriers for women.

"It's not a strength sport, there are no restrictions at all" says chairman Jason Ferguson.

"Perhaps in the past ladies didn't want to go down the snooker club. Perhaps they felt a bit out of place. These days we're a fast moving sport. The opportunity is there for girls to play.

"It's a very young, fashionable sport in China and the women's game is booming in Eastern Europe. We think this is a pattern that's going to continue all over the world."

Despite a drive to improve equality and encourage more females into the game, Evans believes snooker is still "a bit of a boys' club"

"Even in league matches, the other team had to send in letters to see if it was OK for me to play there," she added.

"It still happens to this day. It is frustrating but I just hope that my achievements are proving everybody wrong and that women will be allowed to play in those clubs now.

"We're just trying to get women out there to play, to pick up a cue and then hopefully we can prove everybody wrong - that women can compete against the men."