The 39-year-old made 101 in the first frame of his 6-1 quarter-final win against Marco Fu at the Masters.

The win was the defending champion's 43rd at the Masters, breaking another record held by Hendry.

"I was a bit nervous because I knew everyone was thinking about it. It was nice to get it out of the way early," O'Sullivan told BBC Sport.

"There was still a match to play [after breaking the record] so I thought everyone needed to calm down."

'The Rocket' looked on course to extend his centuries record in the second frame, but missed a brown when on 51 and Fu pinched it on the black to level.

Hong Kong's Fu, 37, had a chance in the third but failed to capitalise, as O'Sullivan made 67 and took the fourth frame on the black to lead 3-1 at the interval.

Further breaks of 85 and 66 extended O'Sullivan's advantage to 5-1, before he took the seventh to progress to the semi-final.

"Now I am playing decent, I enjoy it a bit more," he said. "The older I am, it feels like I have only been a professional for four years.

"To have a positive outlook on it, I feel I can can deal with the ups and downs, I love it. I can handle my emotions more."

Find out how O'Sullivan racked up the centuries record 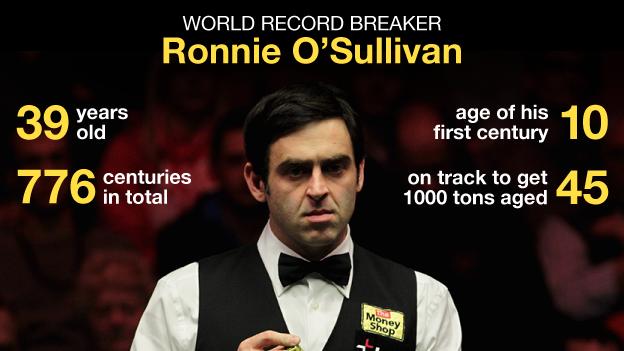