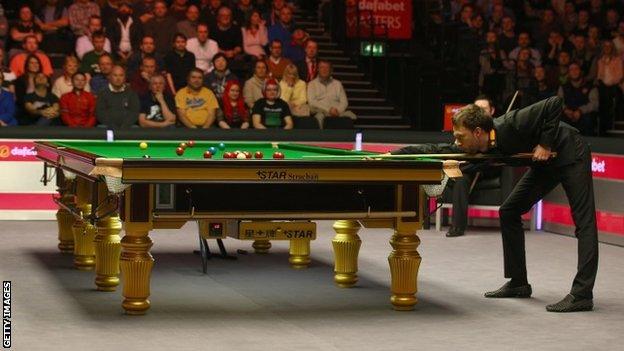 Judd Trump says an Olympic gold medal win would be a better achievement than triumphing at the World Championship.

The world governing body of snooker has submitted a bid to have the sport included at the 2020 Olympics in Tokyo.

"If I could play there once in my lifetime and get the gold medal then I certainly think it would top winning the World Championship," said Trump.

Trump has won four ranking titles in his career, as well as finishing runner-up in four other events, but believes playing at an Olympic Games would be an exceptional achievement.

He told BBC Sport: "I never thought I would get a chance to play there. What makes it so special is that it only happens once every four years.

"Everyone tries so hard to get there, the passion shows. If it happened often, then maybe it wouldn't be as good."

There are now four ranking events - the Wuxi Classic, Shanghai Masters, International Championship and China Open - that take place in the Far East.

The World Professional Billiards and Snooker Association says snooker should be accepted into the Olympics because of its worldwide appeal and Trump agrees.

"Snooker is a lot bigger than some of the stuff that is already in there. It certainly gets more viewing figures so I don't see why it shouldn't be in there," he added.

"It has proved that it deserves to be there. It will do well, especially in Japan. You will get a lot of people watching it."