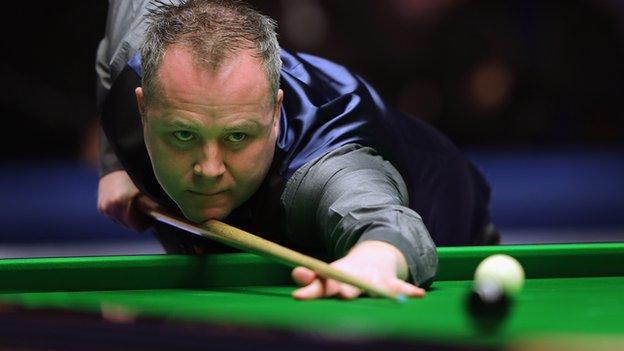 The Scot, 39, won 9-3 to claim his first event since the Shanghai Masters in September 2012, and a record fourth title in Cardiff.

"It was tough and it's great to come out winning," Higgins told BBC Sport.

"It feels amazing to win again and Ben's had a great tournament, he's beaten some great players."

Higgins made breaks of 84 and 105 on his way to a 4-3 lead and then grabbed the final frame before the interval after Woollaston had made 59, the Scot benefitting from a stroke of fortune on the green.

It was one-way traffic after the break as Higgins reeled off the four remaining frames required to get back in the winner's circle.

"I've always been the sort of player that after every high there's going to be a low," added Higgins.

"I was hoping there was going to be another high again and that's what keeps you going. This is a good high and I'll enjoy it tonight. It's great to win and get a bit of confidence back."

Woollaston had been making his debut in a ranking final and is set to move up from his current position of 36th to inside the world's top 32.

"It's been the best week of my life snooker-wise," said the 27-year-old Englishman.

"I didn't really turn up in the final but I've got to take the positives. It could have been very different but John puts you in positions that other players don't.

"Hopefully I'll get to some more finals in the future."