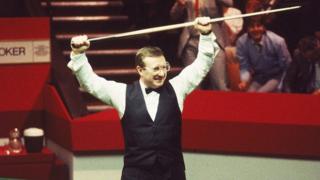 Taylor's remarkable 18-17 victory over Davis on the final black 30 years ago is regarded as one of the great moments in British sport.

Watch a special 'rewind' of the 1985 World Snooker Championship final frame from 11:40 BST, Thursday 30 April on the Red Button and the BBC Sport website.