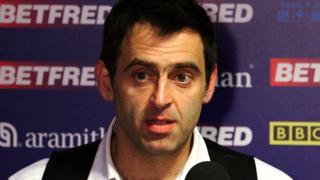 I was always second best - O'Sullivan

Ronnie O'Sullivan admits he was "second best throughout", after being knocked out of the World Snooker Championship with a 13-9 defeat by Stuart Bingham.

O'Sullivan had reached the final for the last three years, but exited as Bingham won five consecutive frames to secure victory after trailing 9-8.

Bingham, who is in the semi-finals for the first time, will face Judd Trump on Thursday.