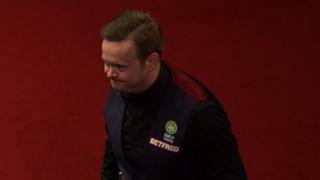 Murphy misses chance for a day off

Former champion Shaun Murphy still needs one more frame to reach the World Championship final after Barry Hawkins slowed down his progress in the semi-final.

Murphy resumed the best-of-33 semi-final 13-3 ahead but was left frustrated as Hawkins won five of the eight frames in Friday's evening session.

Hawkins won four frames in a row to prevent Murphy from reaching the final with a session to spare, instead the 2005 champion takes a 16-8 lead into Saturday's final session.