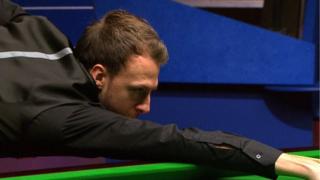 Trump wins your shot of the tournament

Judd Trump's sensational pot of the blue during his semi-final against Stuart Bingham has been voted the shot of the tournament at the World Snooker Championship by viewers.

Trump received 17.6% of the vote, beating off competition from Joe Perry and Alan McManus who were second and third.

Watch the 10 contenders for shot of the tournament here.