Ronnie O'Sullivan says there is no timescale on when he will return to playing competitive snooker.

O'Sullivan's last match was at the World Championship in April, where he lost in the quarter-final to eventual winner Stuart Bingham.

Since then, the five-time world champion, 39, has played in amateur tournaments and exhibitions.

"I am reluctant to give up this easy life I have at the moment which is very enjoyable," he told BBC Sport.

"I am dithering but at the moment I am enjoying life so much I haven't really got the time to practise or give the game 100%."

Asked if a rumoured return to action at the Masters in January is possible, O'Sullivan said: "That is not true."

O'Sullivan went on to speak about his life away from the table and making his debut as a TV pundit for the second round of the UK Championship on Saturday.

How O'Sullivan now lives his life

With little practice now in his schedule, O'Sullivan has time to catch up on his favourite TV shows, as well as giving up bad habits he has picked up.

Start to the day: "I wake up at 4am and put a bit of telly on for an hour. I like my sports so I'll watch that. The Champions League, darts, tennis and athletics I enjoy the most. There is always something on. I'll take 10 minutes to watch the news to see what is going on around the world.

"I like I'm A Celebrity Get Me Out of Here at the moment and Lady Colin Campbell is causing a bit of a stir. You never know, one day I might be on it myself.

"Then I get my jogging bottoms on and go to the forest. I have a slight injury at the moment so I will be walking for five, six miles and do a little bit of running because the back is getting better. That will start my day off. The more I do it, the more I feel I need to have it.

"When I injured my back, I was told I was unable to do any more exercise and for the first couple of weeks I quite enjoyed not having to go to the gym or do the morning run. It does take time out of your day. You end up gaining two hours on your day. It is important that I am able to get some fresh air and it enables me to think and find some answers to questions I have in my mind.

"After that, I'll make my way to the cafe with my friend who I go walking with, sit there and chill and have some breakfast. 80% of my food is healthy because I am liable to put on weight so I know how important diet is. I would go for porridge, poached eggs, grilled tomatoes and mushrooms. I try and stay away from the bread. I then shower and get ready for whatever the day presents for me. That can vary from day to day." 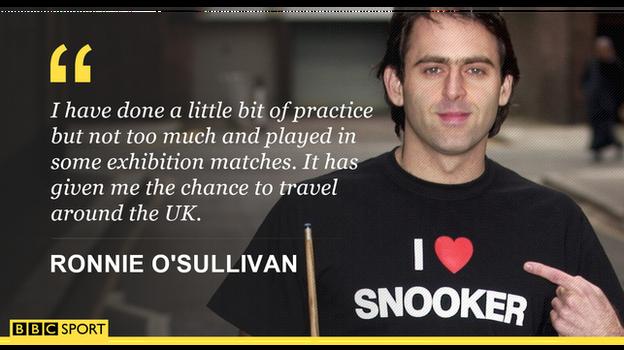 Preparing for the afternoon: "I am ready for the rest of my day by 11am. I have the Ronnie O'Sullivan Show on Eurosport so will take time working on that and also the radio show that I have on a Thursday. I enjoy spending quality time with my son and daughter. In the holidays, I get to spend even more time with them so as a parent, there are responsibilities. You are juggling quite a few things when you get to my age.

"Otherwise I will go down to the club and hit a few balls. I didn't play for around two to three months after the World Championship and decided to play in some of the amateur tournaments at the snooker academy in Gloucester. I have done a little bit of practice but not too much and played in some exhibition matches.

"It has given me the chance to travel around the UK and I love that. We move from one venue to the next and it is exciting because you never know what you are going to get. If there was no snooker for me to play, I would rather stay at home."

A healthy evening meal: "I have dinner at around 6-7pm and my girlfriend does a great curry. We try to do it as organic as you can. When you get to 40, it is harder to keep the weight down so you have to keep vigilant about what you eat. We go to a restaurant sometimes but will always have the grilled stuff.

"My favourite meal during the week is fish, but I love to eat chicken and salads too. We just got back from Bulgaria and Romania and the salads they do out there are unbelievable. I am going to try that in my diet over here. We tend to eat a lot of bread and pasta here."

Winding down: "9pm would be an early night for me. I had six hours' sleep on Thursday night which is the most I have had in about five years. I overslept. I usually have four hours and that keeps me going. I am flying if I get four hours.

"At the moment, I am reading Allen Carr's book The Only Way to Stop Smoking Permanently. That will be in my handbag which I carry around with me everywhere I go. In there I also have my pens, driving licence, some euros and my passport. Any time I think I need to go somewhere, I will always have the essentials ready in my bag. I can go to any country with that and survive.

"When I run, I don't ever feel like smoking but the last six weeks I haven't been able to and it has been a hard time for me. I may have to have an operation on my back. I was feeling sorry for myself and decided to start smoking again. It is not a good idea but I am getting off them."

'There is a duty to say what needs to be said'

O'Sullivan won his fifth UK Championship title in York last December, but decided not to defend his crown. Instead, he will be making his debut as a snooker pundit starting on Saturday on Eurosport.

"Gary Neville is a great football pundit but he has learnt off a great in Sir Alex Ferguson. Gary knows the game inside out and everyone has their different ways of looking at a game.

"The aim of punditry isn't to be controversial, it is about being honest and giving the viewers an insight. As a pundit, there is a duty to say what needs to be said.

"I will have my own view on how a match is going and I will have played against a lot of the guys so will provide an insight on how certain players will match up. I can give a view on their strengths and weaknesses too. Snooker is about cancelling each other out so if a player has an attacking game, you can put pressure on their weakest part."