O'Sullivan won five straight frames to go 5-1 up before adding one more as he seeks a record-equalling sixth title.

The 40-year-old, in his first major event for nine months, had breaks of 121 and 81 as he reached his 11th Masters final.

However O'Sullivan was unhappy with his performance, saying: "I felt really embarrassed."

The five-time world champion, who is playing his first major tournament since taking a break from the sport last April, said a problem with his back might have contributed to what he felt was a sub-standard display.

"I'm not sure if it's because my back is out of place so it's messing around with my posture and technique," he told the BBC.

"I was over-hitting balls by two or three feet, I could not hit certain shots because I could not get the cue through - it was awful out there.

"I'm not in pain but my alignment is so out that I have no touch or feel. It feels like my body and cue are so disconnected, I'm having to will the ball in. I am having to grind it out, but it's not easy.

"When you're playing alright and getting among the balls there's no better tournament for me because it is right on my doorstep with brilliant support.

"I'm just sorry I have not been able to perform. I feel very flat in myself. It's been difficult to get that zip and bounce in my step. I felt really embarrassed, I felt like I was short-changing them."

Hawkins made three centuries, including 130 and 128 in the opening two frames, as he beat the world number five.

Trump started favourite after a thrilling win over Neil Robertson and fought back to go 4-3 ahead, but Hawkins won three straight frames.

The world number eight had never previously won a match at the London tournament.

But he has put in a succession of fine displays at Alexandra Palace this week, and held his nerve in a tense 10th frame against Trump.

Hawkins, 36, shook his right hand in triumph after potting the final pink to seal victory. He had previously sunk a tricky long blue into the bottom left corner.

"It was a chance, and you can't refuse that. If you pot that, it's game over and that's what happened," said Hawkins, who lost to O'Sullivan in the 2013 World Championship final.

"It's a blind pocket shot - it's horrible. You just pick an angle and hope for the best. Even that pink, I was shaking all over the place.

"Judd was obviously favourite to beat me but I knew if I took my practice game out there I had a chance. I can't believe I'm in the final now and have a chance of winning it."

View on the final from pundits

Six-time world champion Steve Davis: "Ronnie O'Sullivan will be a very strong favourite, but Barry Hawkins is playing superbly well and I wouldn't put it past him to make it very difficult for Ronnie."

John Parrott, world champion in 1991:"The start of the match could be very important indeed. If Barry Hawkins starts well and stamps his authority on the match, it could be a lot closer than people think." 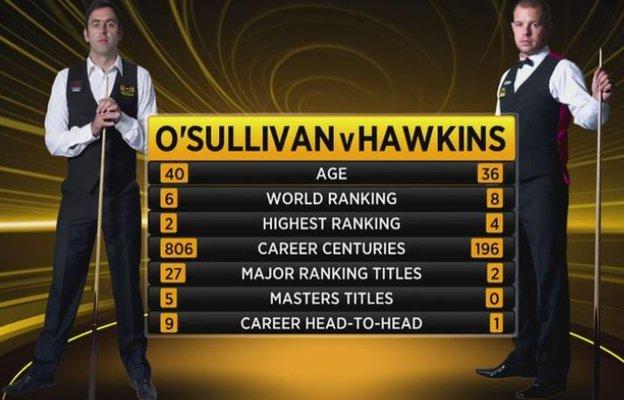