Ronnie O'Sullivan says he is "not really bothered" about the World Championship at the Crucible and will "treat it like a vacation".

Victory took him to joint second in the list for most ranking titles with 28 alongside John Higgins and Steve Davis - eight behind leader Stephen Hendry.

"The most important thing for me is to get my sleep sorted," said O'Sullivan. 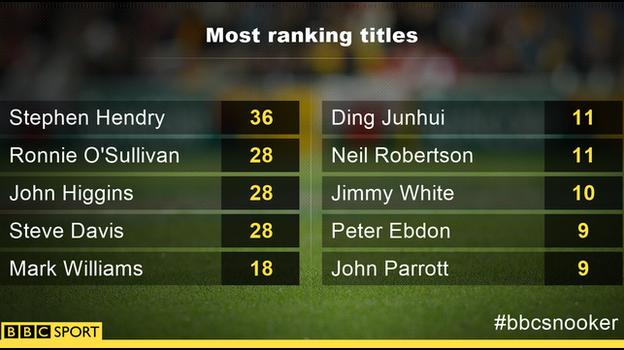 Five-time world champion O'Sullivan has previously spoken about the lack of sleep he gets during a night and feels it will be the contributing factor in whether he wins a sixth world crown in Sheffield or not.

"My body is just gone and I feel like I am overtired," he said. "I need a nice easy month now without any competitions and relax by filling the tank up.

"If I get my sleep right then I have got half a chance. If I don't get it right then playing two sessions in one day will be too much for me.

"The most important thing is to get that right then everything else will fall into place.

"You just have to accept it will be a long haul and you could get beaten in the first or second round and then you don't have a problem.

"I'm not really bothered about Sheffield, I am not bothered about any tournament. I just treat it like a vacation and enjoy the time that I am away."

'I should have won more ranking titles'

In Cardiff, 40-year-old O'Sullivan spoke of his boredom during tournaments and preferring to play in exhibition matches.

'The Rocket' caused controversy at the Welsh Open when he turned down the chance to make a 147 break because the £10,000 prize money was "too cheap".

He potted 14 reds and 13 blacks before opting for an easier pink as he made a 146 in the first round.

Victory in the final extended his unbeaten run in 2016 to 19 matches, having won the Masters and Championship League in January, followed by his triumph at the Welsh Open.

In April, after losing in the quarter-finals of the 2015 World Championship, O'Sullivan decided to take an eight month sabbatical from the game, returning to action in December.

"I have been playing 25 years and I have only 28 ranking titles. You think, 'what the hell is going on'? I should have had about 56. I should be getting two a year."