Ronnie O'Sullivan says his combination of winning and entertaining the crowd means he should be considered one of snooker's greats.

"That is what makes me unique and separates me from the others," O'Sullivan, 40, told BBC Sport.

"Watching sport, I am a winner's man but I like to be entertained too. You have hit the jackpot if you have both."

Five-time champion O'Sullivan is the favourite to win the 2016 World Championship, which starts on Saturday.

'The Rocket' comes up against qualifier Dave Gilbert in the first round of the tournament at Sheffield's Crucible Theatre on Sunday at 14:30 BST.

This season, he won the Welsh Open in Cardiff to move second on the all-time list of most ranking titles with 28 alongside John Higgins and Steve Davis, eight behind Stephen Hendry's 36. Scot Hendry's record also included seven world titles.

"I am not saying I am the greatest - that would be too big-headed to have as an opinion of myself. I will leave that for other people to decide," added world number six O'Sullivan.

"If I was to stake my case for reasons why I should be considered as one of the greats, I would like to think I entertain the fans like Jimmy White and Alex Higgins did, being the fans' favourite.

"I have also done what Stephen Hendry and Steve Davis did, which is dominate and claim world titles and be a winner.

"I can possibly reach 36 ranking events - that's winning two a year if I play for the next five years. I could do that, which is more realistic than winning seven world titles."

Who's 'gonna win' and who is a 'possible world champion'?

The top 16 ranked players were all present in Sheffield on the eve of the event, and BBC Sport asked each player to sum up their chances of winning the title in three words or fewer (seeding in brackets):

Defending champion Bingham goes into the tournament knowing he needs to overturn the record books.

Bingham was a shock winner last May but no first-time winner has gone on to defend their title the following year, a phenomenon known as the 'Crucible Curse'.

He faces two-time finalist Ali Carter in the first round on Saturday (10:00 BST).

"I wish I was playing someone else," said Bingham, who has failed to win a title this season. "I have not beaten him the last six times we have played and it is going to be tough. There is a different pressure on me this year and I want to go out and enjoy myself." 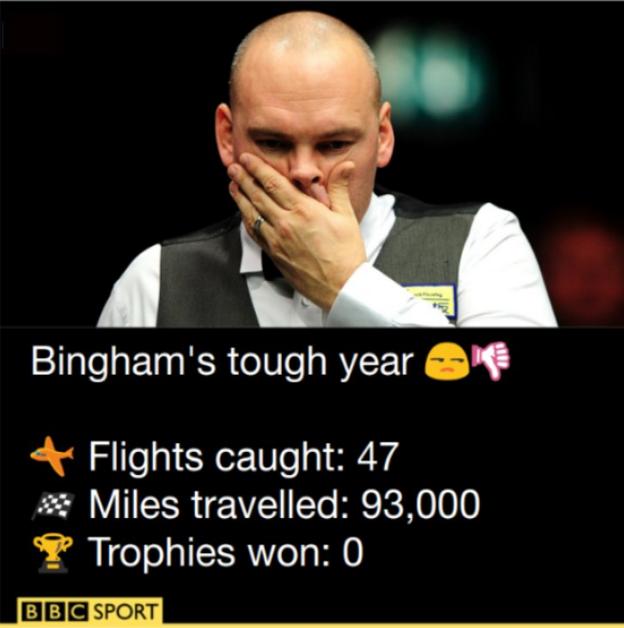 World number five Judd Trump, 26, won the last tournament, the China Open, but no player has gone on to claim the season-ending World Championship in the same year.

"My form and my game is there," Trump, who faces Liang Wenbo in the first round, told BBC Sport. "This is the only tournament I get excited for.

"Not winning both events in the same year will change this time. It is an advantage to win the previous event, it gives me a confidence boost which will help." 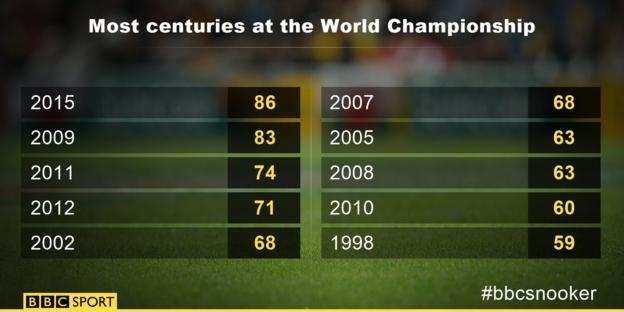 BBC Sport pundit and 1991 world champion John Parrott: "This is the hardest championship I have ever seen. The draw is an absolute minefield. It is so difficult to choose just one player because wherever you look, there will be tough matches. Judd Trump and Neil Robertson will take some beating this year but they could meet as early as the quarter-final stage."