Qualifier Sam Baird said a mid-match chat with a fan in the crowd helped relax him in his shock 10-7 first-round win over world number 15 Michael White in the World Championship.

Baird led 5-4 overnight only for a tentative start to the second session see him trail 7-6.

But a seemingly nerveless four-frame burst, which included a break of 103, took the Devon man through.

"I don't mind chatting. It kind of lightened the mood," said Baird, 27.

"It was stressful out there. He was a nice guy.

"He asked me what the table was like because he heard on commentary they weren't very good."

World number 59 Baird was thrilled to have shown his talents on snooker's biggest stage, having been brushed aside 10-2 by Stuart Bingham in his only previous Crucible appearance in 2013.

"I didn't think it was too high quality all the way through," Baird added. "We were both under a lot of pressure. 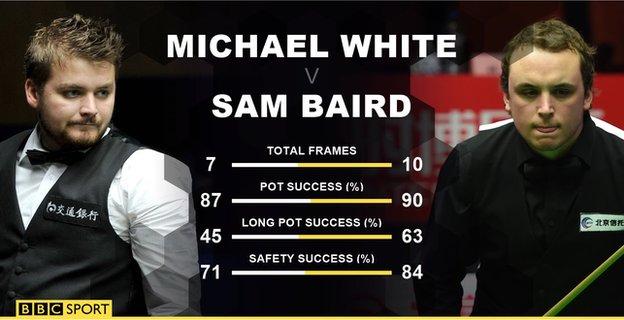 "I am thrilled with how I finished it, but I don't really know where that came from. I am over the moon. I don't know what happened to me.

"I really wanted to give a good account of myself. Winning never crossed my mind. It has all been a bit of blur, but I just wanted to play well and near how I can play."

Baird took advantage of an outrageous fluked red to win the 15th frame and go 8-7 ahead and he closed out the win with breaks of 103 and 62.

His victory, which has guaranteed him £22,000, could see him face Mark Selby in the second round. Selby leads Robert Milkins 7-2.

"It's my biggest pay day by miles and has put me up the rankings a fair bit," he said. "But the money hasn't sunk in yet.

"Playing Mark would be an incredibly tough game. He is the world number one and would be a be a big favourite against me over a long match."