A revamped World Snooker tour will see an increase in both ranking events and prize money next season.

"This underlines how much the sport is growing and the fantastic opportunities available," said World Snooker.

However, the second-tier European PTC has been scrapped - although a proposal for a new amateur tour, backed by 2005 world champion Shaun Murphy, has been sent to snooker's governing body.

The 2016-17 season begins on Saturday, with the Indian Open qualifiers in Preston, just 26 days after Mark Selby became world champion for a second time at the Crucible in Sheffield.

The new campaign sees the number of ranking events increase by eight, played across Europe, Asia and Australasia, and prize money reach the £10m mark for the first time, a £1.5m increase from last season. 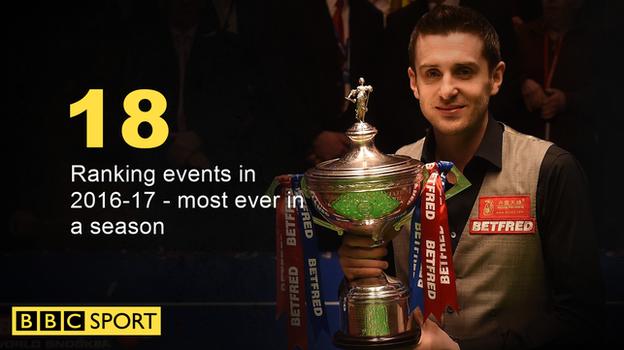 The formation of a 'Home Nations' series will see new English, Irish and Scottish Opens being played alongside the existing Welsh Open, with a £1m incentive available if a player wins all four events.

The World Open, last on the calendar in 2014, makes a return, while the Paul Hunter Classic, European Open and Gibraltar Open are all now ranking events.

A World Snooker spokesman added: "This will be snooker's biggest season ever in terms of the number of major events and prize money."

Earlier this month, World Snooker came in for criticism from some players after adding the one-frame Shoot Out tournament to its ranking list for next season.

All events will see a 128-person draw, apart from the World Championship, with the showpiece 32-competitor event at the Crucible remaining unchanged in its format, seedings and qualifying.

Concern for the amateur game

The proposal to form a new amateur governing organisation, under the name of 'Snooker Europe', has been spearheaded by the director of the Snookerbacker Classic - financially the biggest event in Europe for players who are not members of the professional tour.

The plan outlines players being able to compete for professional tour places in a series of matches in the UK and Europe, with at least £60,000 prize money available.

In previous seasons, amateur players were able to compete for a brace of two-season tour cards through an order of merit list on the European PTC, but will now not get the opportunity to do that.

World number four Murphy said the Snooker Europe plan is "a much-needed shot in the arm for amateur snooker in the UK and Europe".

Jason Ferguson, chairman of world governing body the WPBSA, said he is "fully supportive of nurturing talent" but feels the proposal would lead to "a complete restructure of snooker" across England and Europe.

"We take a global view. Any proposals need to fit into our strategy," he told BBC Sport. "Anything done will need to fall in line with the existing structure.

"I have seen the support this has gained on social media but they are asking for funding and tour cards. We are a global sport, there are 110 bodies across the world that want tour cards."