Marco Fu completed an astonishing comeback as he recovered from 7-2 down to beat Luca Brecel 10-9 and reach the second round of the World Championship.

The world number eight won six out of seven frames at the start of the second session to level at 8-8.

And although Belgian qualifier Brecel scored a classy 78 in the 17th frame, Fu kept his nerve to win in a thrilling match at the Crucible in Sheffield.

He fended off Chinese teenager Yan Bingtao's comeback to earn a 10-8 first-round victory at the Crucible. 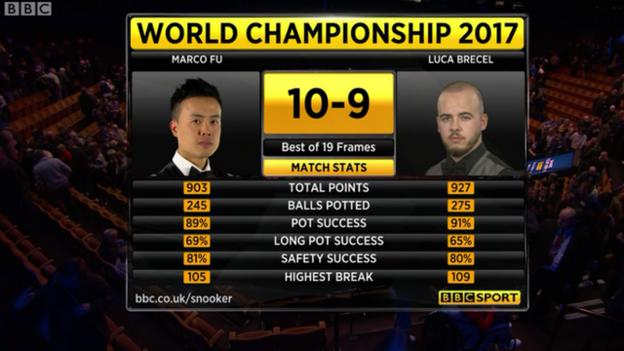 The 17-year-old qualifier then played with a style belying his age to fight back from 9-5 down against his increasingly flustered opponent.

Englishman Murphy, who won the title as a qualifier in 2005, took advantage of an outrageous fluked red in frame 18 to progress.

Yan would have become the youngest player to win a World Championship match at the Crucible if he had overcome Murphy. The record is held by seven-time champion Stephen Hendry, who was 18 when he beat Willie Thorne in the 1987 first round.

Murphy, who faces Ronnie O'Sullivan in round two, was mightily relieved not to be on the wrong end of a piece of Crucible history.

"I played well but at 9-5 up he opened his shoulders and I was bang up against it at the end," the 34-year-old said.

"This place does funny things to you and I had a bit of Lady Luck. But I can't praise him enough. He has a bit of swagger about him."

In an all-China battle, Ding Junhui - runner-up to Mark Selby last year - was in majestic form on his way to a 7-2 lead over Zhou Yuelong.

Elsewhere, four-time champion John Higgins of Scotland was ruthless as he raced into a 5-0 lead before taking a 7-2 advantage over English qualifier Martin Gould.

Bingham earlier went through with an unconvincing 10-5 victory over another former Crucible winner Ebdon.

The world number three was pegged back to 5-4 overnight as the 2002 champion took the final two frames of the opening session.

But Bingham quickly extended his lead to 8-4 and closed out victory after Ebdon got back to 8-5.