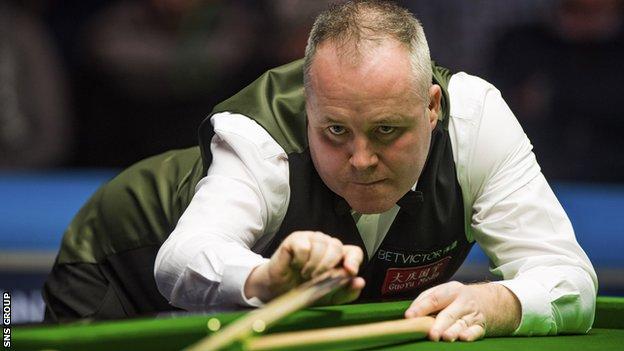 John Higgins is "quietly pleased" to be starting his World Championship campaign against Mark Davis.

At 46, Davis is the oldest man at the Crucible and enjoys a winning head-to-head record against Higgins.

Four-time champion Higgins, 43, is bidding to reach a third successive final in Sheffield, having been runner-up two years running.

"Mark is such a tough all-round competitor and I know I will have to be on top of my game," he said.

"He's a better player now than he's ever been. I've lost a few times to him but I was quietly pleased with the draw."

Higgins, who has not won a title this season, goes into the tournament ranked fifth.

"I'm just trying to put a pretty poor season behind me," he said. "Obviously you can turn that round with a good World Championship and then maybe go into the summer break feeling a bit better about yourself."

Higgins has been practicing for the past month with fellow Scots Stephen Maguire and Anthony McGill in Glasgow.

"We should probably have done it years ago," he said of the new arrangement. It's good to have a bit of company and camaraderie.

"It's sharpened my game, playing against top players."

Mark Williams caused a huge upset last year, holding off a Higgins comeback to prevail 18-16 in the final, his third World Championship triumph coming 15 years after his last.

"In the 25 years I've been coming here, it's gone with the form book a couple of times but more often it has not," said Higgins.

"Although it's normally a top player that wins it, it's sometimes not the name everyone on everyone's lips and I really think that could happen again.

"We all know Ronnie (O'Sullivan), Neil (Robertson) and Judd (Trump) are playing unbelievable stuff but Judd's never won it before, it's been nearly 10 years for Neil and Ronnie's not won in the last five.

"You've still got to include Mark Williams and Mark Selby, who's won three of the last five."

Find out how to get into snooker, pool and billiards with our fully inclusive guide.