Neil Robertson completed a 10-1 destruction of World Championship debutant Michael Georgiou, who avoided becoming only the second player to suffer a Crucible whitewash.

Robertson led the first-round tie 9-0 after Saturday's first session but Georgiou scored a brilliant 90 to take Sunday's first frame before bowing out.

"The crowd were fantastic and I still loved the experience," Georgiou said.

"The damage was done yesterday. But I wanted to show what I can do."

World number four Robertson said snooker can be a "brutal" sport and was delighted with his performance.

"I had a great start and put him under a lot of pressure," the 2010 champion said.

"I took full advantage of playing a debutant. I was really pleased with the way I played. I was pretty ruthless."

Only Robertson's fellow Australian Eddie Charlton has been beaten 10-0 at snooker's showpiece event in Sheffield, losing by that margin to John Parrott in 1992.

Danny Fowler retains that record, set in his 10-1 loss to seven-time world champion Stephen Hendry in 1993. 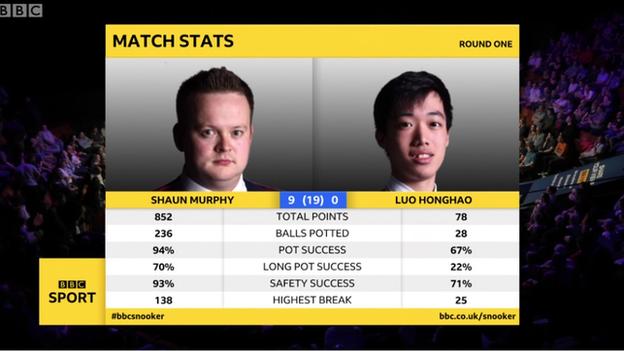 While Georgiou has escaped snooker infamy, China's Luo Honghao is in serious danger of 'beating' both those Crucible records

The 2005 winner Shaun Murphy scored four centuries - including a tournament high 138 - as he romped into a 9-0 lead against the 19-year-old Chinese debutant Luo Honghao.

By the end of their opening session, world number 92 Luo had scored only 78 points.

Ding gets the job done

There was no such trouble for Luo's compatriot Ding Junhui.

The 2016 runner-up showed signs of his best form before scrapping his way into round two with a 10-7 win in a high-quality match against Anthony McGill.

However, an increasingly edgy Ding finished with a stylish 106, one of 15 breaks of more than 50 in the match, to reach the last 16 for the 10th time.

"I played well but it is not good enough if I want to win the tournament," said Ding, who could meet Judd Trump next.

"I need to get better and have good concentration for the whole match. I need more confidence because I haven't played good this season."

Higgins on top against Davis

Davis, 46, the oldest player in this year's event, won through qualifying for a record 10th time to reach his 11th World Championship.

He began with a break of 57 to take the opener, but scores of 100, 61 and 75 helped Scotland's world number five Higgins to a 4-2 lead and three further half-centuries extended his advantage.

However, Higgins' 25th consecutive World Championship appearance was marred by an injury to his brother Jason, who was taken to hospital with a suspected broken leg after reportedly falling down some stairs backstage during the morning session.