Three-time champion Mark Selby survived a scare to beat world number 67 Zhao Xintong 10-7 and reach the second round of the World Championship.

An out-of-sorts Selby fell 5-1 behind but dug deep to reduce the gap to 5-3 at the end of the morning session.

The world number two took control, using all his experience to win five of the next seven frames and progress.

Murphy's total dominance saw the Chinese qualifier score the fewest points in the venue's 43-year history, the world number 92 managing a tally of only 89 - 102 short of the previous low.

In complete contrast to Murphy's spectacular performance, Selby was horribly out of form early on and faced a shock first-round exit for a second successive year.

Selby, who faces English qualifier Gary Wilson on Thursday, joked: "It was never in doubt. I am over the moon to get through. I managed to dig in.

"Nothing really fazes him [Zhao]. He just plays an attacking game and pots unbelievable balls, but then misses a few easy ones.

"To come out 5-3 I felt like I was in front. I put the pressure on him tonight and managed to close it out."

The Leicester man fell 3-0 behind to Zhao following a scrappy start, but scored a century in the fourth to make it 3-1.

The Chinese qualifier Zhao capitalised on some increasingly sloppy play to go 5-1 up, but Selby's characteristic fighting qualities came to the fore.

The 15-time ranking event winner compiled two 131s and four breaks of more than 50 in winning six of the next seven frames for a 7-6 lead.

And although Zhao drew level courtesy of some breathtaking long potting, a three-game run got Selby over the line.

The only previous instance was veteran Eddie Charlton's 10-0 loss to John Parrott in 1992.

Luo's exit saw the 19-year-old register a new lowest points tally at the Sheffield venue. Danny Fowler had held the record by scoring 191 in losing 10-1 to seven-time champion Stephen Hendry in 1993.

Murphy, who will face 2010 champion Neil Robertson in the last 16, said: "Everyone was talking about the record and it was in the back of my mind that I could make a bit of history." 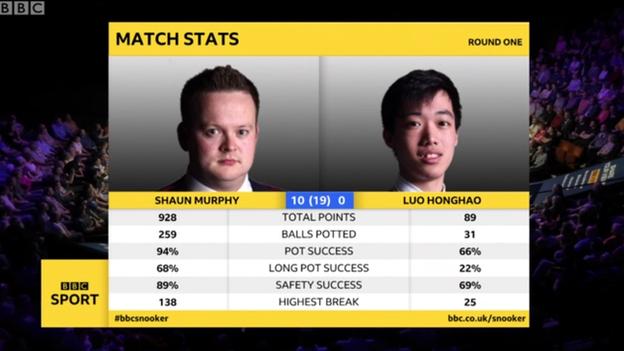 The 2005 champion led 9-0 overnight having scored four centuries, including a tournament-high break of 138.

When play resumed Luo, 19, missed a couple of chances to get a frame on the board before Murphy got over the line with a break of 59.

"It's been the worst season of my life," added 36-year-old Murphy, who has only once gone beyond the third round of a ranking event this season, reaching the Scottish Open final in December where he lost to Mark Allen.

"This a very special place. It's the holy ground for snooker players and it gets your juices flowing. Maybe that is the spark. There are glimmers of good form but I am not getting ahead of myself."

In the other evening match, world number 16 David Gilbert led fellow Englishman Joe Perry 6-3 at the end of their first session.