Judd Trump overturned a 6-3 deficit to win a thrilling final-frame decider against Thepchaiya Un-Nooh and keep his World Championship hopes on track.

The world number seven was outplayed on Tuesday and in danger of joining Ronnie O'Sullivan as a first-round casualty.

But he rediscovered his form to win five of the first six frames on Wednesday morning for an 8-7 lead.

The Thai world number 43 forced a deciding frame but a horrible miscue helped Trump to a 10-9 win.

The 29-year-old, who will play Ding Junhui in the last 16, scored a 53 in the final frame after setting up the chance with a wonderful crossed-double red.

"The double was a huge shot," Trump said. "I didn't have a lot on so I opted for the double and was over the moon to see it go in.

"I was better today. I missed a lot yesterday and made it easy for him.

"He goes for everything and it's a scary style of play to play against, so it's a big relief to get through." 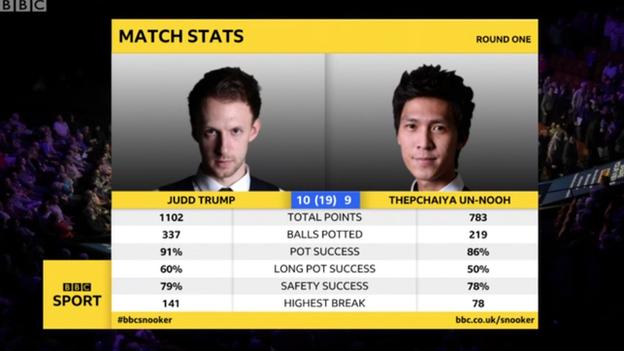 Both players scored three breaks of 50-plus when play resumed on Wednesday to take a captivating match all the way.

But reigning Masters champion Trump made fewer unforced errors and capitalised on more of the chances that came his way to get over the line.