Five-time world champion Ronnie O'Sullivan says the standard of snooker lower down the rankings is so "poor" he would have to "lose an arm and a leg to fall out of the top 50".

He faces Mark Williams, 45, next in Sheffield, with both players turning professional in 1992.

O'Sullivan said young players coming through "are not that good really".

Englishman O'Sullivan, Welshman Williams and Scot John Higgins all graduated as pros 28 years ago and have gone on to dominate the sport.

The trio remain in snooker's elite top 16, have won 13 world crowns between them and a staggering total of 98 ranking titles.

O'Sullivan and Williams first faced each other in the 1994 Welsh Open, with the Chigwell man claiming 31 victories in 45 head-to-head encounters.

Asked if would have believed he and Williams would still be performing at the top over two decades later, O'Sullivan told BBC Two: "Probably not if you asked me then but when you look at the standard of play, I would say yes.

"People like me, John Higgins and Mark Williams, if you look at the younger players coming through, they are not that good really. Most of them would do well as half-decent amateurs, not even amateurs. They are so bad.

"A lot of them you see now, you look at them and think, 'I would have to lose an arm and a leg to fall out of the top 50'. That is why we are still hovering around, because of how poor it is down that end."

O'Sullivan suffered a shock first-round defeat against amateur James Cahill last year but reaches the last-eight stage for the 18th time in his career.

'The Rocket' finds himself in the more difficult half of the draw, facing three-time champion Williams next before a potential blockbuster meeting against Neil Robertson or Mark Selby in the semi-finals.

He and China's Ding were neck and neck up until the final session, Ding's long potting deserting him as O'Sullivan made breaks of 87, 73, 60, 117 and 93 to go through.

O'Sullivan told BBC Two: "I am just glad I found a way to try and compete with my mind out there. For a while I have been going out and slapping balls about having fun, not caring if I won or lost. Deep down I do care but treat it like a bit of fun.

"I spoke to Steve Peters and worked on a few things so when I went out there my mind was clear. It is better with the fans, of course it is. It is like playing in a morgue out there."

How the others advanced 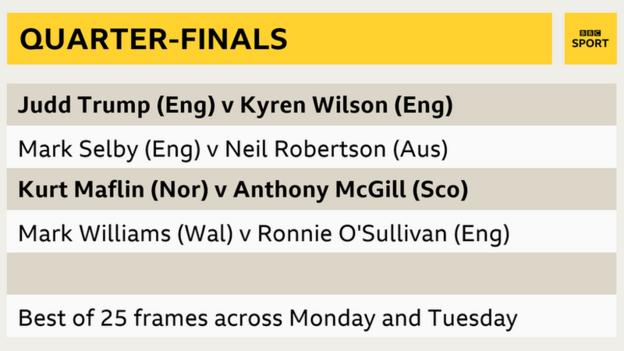 World number two Neil Robertson battled to a 13-9 victory over Barry Hawkins, the Australian taking charge of the final session to set up a meeting with three-time champion Selby in the quarter-finals.

Robertson believes delaying this year's World Championship to July-August because of the coronavirus pandemic has affected the playing conditions, telling BBC Two: "The table is playing very heavy, it is very humid out there and it does not feel like playing at Sheffield. It feels like playing in Asia and it is tough to screw the ball back."

Meanwhile, Kyren Wilson withstood a brilliant fightback from compatriot Martin Gould to progress by the same scoreline, despite the world number eight seeing a healthy 10-3 advantage cut to 11-8 in the final session.

Wilson sets up a mouth-watering last-eight tie against world number one and defending champion Judd Trump, who said last year the pair "don't speak" and "don't really get on".

At 7-2 down, McGill felt Clarke was standing in his line of sight on a shot on a number of occasions and made his feelings known to his opponent, before referee Jan Verhaas had to step in to intervene.

Clarke took the frame but seemed to lose focus, tweeting "you want to dance, let's dance" during the mid-session interval which sparked McGill's resurgence.

McGill won seven out of the next eight for 9-9, the pair traded frames for 11-11 and Clarke took a 40 minute battle to go one from victory.

Welshman Clarke was 51 points ahead in the next but missed a pink, allowing McGill to snatch the final black and take it to a decider, which he claimed at 00:10 BST.

McGill faces Norway's Kurt Maflin in the next round, guaranteeing a qualifier to reach the last four.