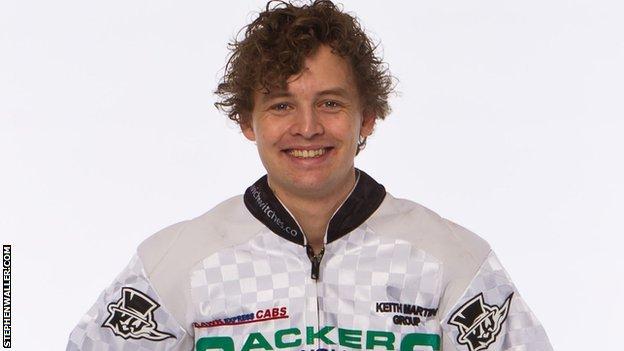 Ipswich Witches riders Taylor Poole and Morten Risager face lengthy spells on the sidelines after serious falls in the season-opener against Rye House.

Australian Poole, 19, suffered a severely broken right arm and 24-year-old Risager, from Denmark, broke a vertebra in his back.

Last Thursday's meeting was abandoned after six falls in 12 heats.

Three Rye House riders were also hurt and skipper Chris Neath has undergone surgery on his neck and spinal column.

Jordan Frampton suffered a broken scaphoid bone in his wrist and will be out for six to eight weeks, while doctors are still awaiting the swelling around Jason Bunyan's ankle to go down so they can fully assess his injury.

Ipswich director of speedway Chris Louis told BBC Radio Suffolk: "It was a horrible way to start the season for everybody.

"There was certainly no reason with the track - the track was in perfect condition. It was just Premier League speedway, youngsters all keen to start the season strongly, (who) should have been riding their way into it."

The Witches lifted the Anglian Cup with an aggregate 83-81 victory, despite Rye House winning Saturday's second leg 48-42, but their success was overshadowed by continuing concerns about the injured riders.

Poole was involved in the biggest crash on Thursday evening as three riders hit the air fence and he was left tangled with his bike.

He was taken to Ipswich Hospital for treatment and subsequently discharged with his arm in a brace and strapped to his chest.

A club statement said Risager would also need to wear a brace while his back heals and his parents had flown from Denmark to visit him.

"Currently it is not known how long either rider will be sidelined," the statement continued.