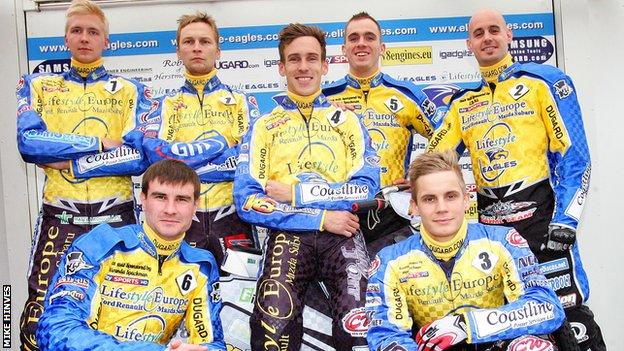 Eastbourne Eagles team manager Trevor Geer admits they will need to improve despite registering their second win of the Elite League season.

The Eagles picked up three points with a 49-41 victory over King's Lynn at Arlington Stadium on Monday night.

Geer told BBC Sussex: "We really did struggle. We didn't look like we were going to do anything in the first part of the meeting.

"We should be able to match anyone. The boys dug in and motivated themselves."

Davey Watt rode as a guest for the Sussex side to cover for Joonas Kylmakorpi, who is likely to miss the rest of April with a collarbone injury.

With two meetings on Good Friday against Lakeside Hammers, Geer says the Eagles will now use the rider replacement system until their number one is able to return.

"We did look at the possibility of brining someone else in until Joonas is fit again," Geer said.

"If we do get someone in, it won't be a top rider and they'll have to get used to the track. I think we can hold our own with rider replacement."