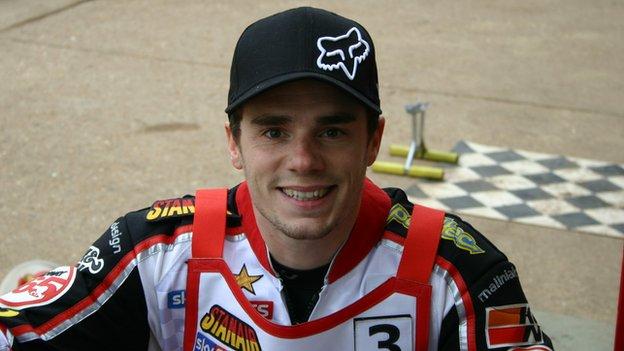 Friday's East Anglian derby between Peterborough Panthers and King's Lynn Stars will be a "heated" affair, according to Peterborough's Olly Allen.

Both line-ups will include at least three riders going up against their former side - Allen included.

"I think it will be quite tense," he told BBC Radio Cambridgeshire.

"There's bound to be some drama at some point. Local derbies always bring out a bit of fire in the bellies. It could even get a little bit heated at times."

The Panthers will kick-off their Elite League campaign with Good Friday's double-header, with the first meeting held at Alwalton before both teams make the trip to Norfolk for the second instalment in the evening.

King's Lynn meanwhile have made a solid start to their season, brushing aside last year's runners-up Eastbourne Eagles at the Norfolk Arena before falling just short in Monday's return clash on the south coast.

"I can't see either team winning by a lot at either venue," said 29-year-old Allen.

"It's a mouth-watering prospect for any speedway fan."

David Howe, one of the former Peterborough riders in the Stars' squad, has personified his team's eagerness from the offset, claiming 28 points from the opening two meetings.

"I think Peterborough will be a good test of where the team is at," said the 30-year-old.

"It's kind of King's Lynn against King's Lynn in a way isn't it? They've got a lot of ex-King's Lynn riders who are good around the Norfolk Arena.

"So it will be a stern test and hard on man and machinery but we'll be ready. There should be good crowds with some cracking racing."