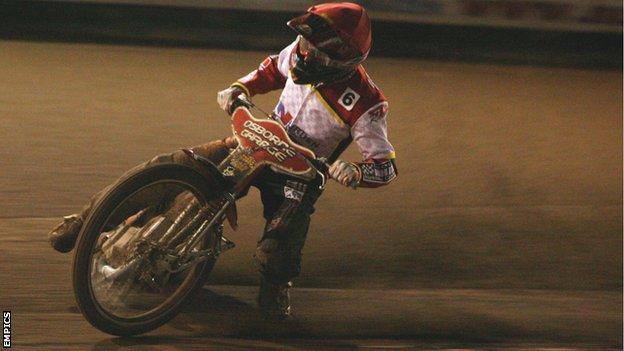 Swindon rider Simon Stead says their 54-39 win over Coventry on Monday proves how good their line-up is this season.

Skipper Hans Andersen achieved an unbeaten 14+1 score, while Peter Kildemand scored nine from three rides before crashing out of his fourth.

"I think the result shows how good we are," he told BBC Wiltshire.

"It was a great victory. Coventry are renowned for running us close here and we knew it was going to be hard work.

"The results didn't overexaggerate the performance. They had a little bit of bad luck in some of the heats but we performed well as a team and it was justified."

Stead is the only member of the current Robins line-up who rode for the club during their disappointing campaign last season.

And although he believes the squad are stronger this term, he is wary of being over-confident about their unbeaten record so far.

"It's a different kind of atmosphere in the pits - but that's what you get with a winning team," he added.

"When you are getting the results then it is a lot easier. There will be more testing times throughout the season but the character of the team will shine through."

Swindon are next in action on Wednesday night at fourth-placed Poole, who beat Coventry 52-38 last time out.