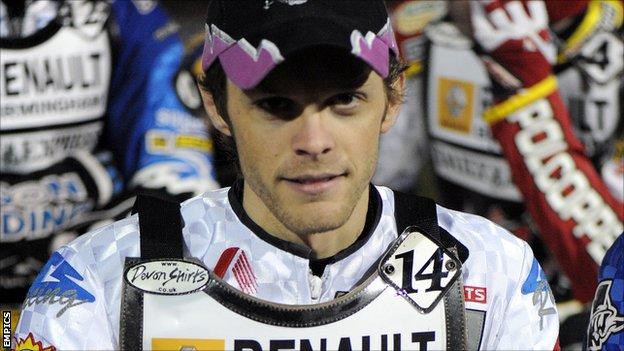 Belle Vue Aces could be without captain Rory Schlein for a month after he broke a bone in his foot during the 57-33 loss to Birmingham Brummies on Monday.

The Australian fell during the first heat of the Elite League meeting.

"Our run of bad luck just gets longer," said manager Jim Lynch. "We feared he had broken his ankle because it looked bad and he was in a lot of pain."

Meanwhile, Belle Vue hope to complete the building of their new stadium in time for the start of the 2013 season.

Our run of bad luck just gets longer

The Aces have had plans for more than a year to move to a new facility, which will be used as the national speedway stadium, just 100m from their current home at Kirkmanshulme Lane.

The construction of the new stadium should take around six months to complete.

"I can say at last that the target is to be in the stadium by the start of next season," said Belle Vue chief David Gordon.

"Things have been very quiet for a long time while (managing director) Chris Morton and I have have been doing the hard yards of the detailed negotiations with meetings almost on a daily basis, but everything we have dreamed about is getting closer."