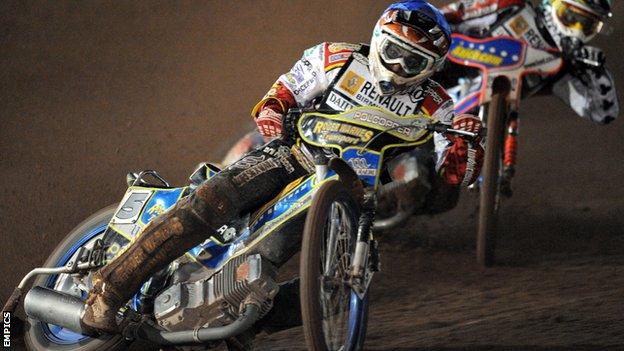 Swindon promoter Gary Patchett has admitted the club are concerned by the disappointing form of number one rider Troy Batchelor.

The 24-year-old Australian re-signed for the Robins at the start of the current Elite League campaign.

But he has since been replaced as their heat leader by Hans Anderson, after recording a lowly 5.69 average over their six meetings so far.

"I'm not sure what's wrong with him," Patchett told BBC Wiltshire.

"I don't know what it is but it's the manager's job to deal with that issue.

"Clearly it's a concern and we've got to make it right sooner rather than later."

He was originally signed as a doubling-up rider but this was made temporary following the closure of his Premier League club Newport.

The Wiltshire outfit were told they could no longer use him until he found a Premier League place but they have now handed him a spot with Kenny Ingalls standing down.