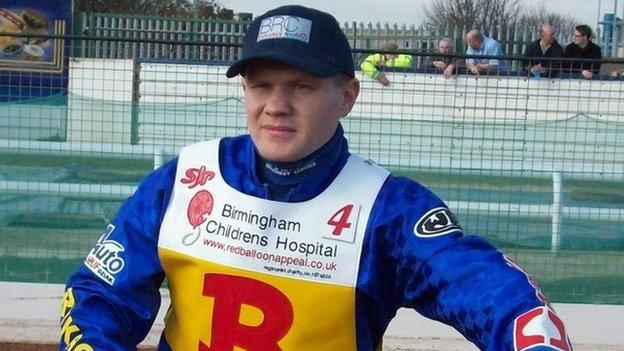 Birmingham Brummies' Tomasz Piszcz is expected to be unable to ride for at least six weeks following the accident which put him in hospital on Thursday.

The Pole will remain in hospital until Sunday after crashing in the Elite League match against Belle Vue.

Piszcz tangled with the Aces' Craig Cook in Heat 2 and was taken from the circuit in a neck brace and suffering from concussion.

Birmingham co-promoter Graham Drury said: "It was an horrendous crash."

Hospital checks revealed Piszcz suffered damage to his neck bones and will be required to wear a collar for around three weeks.

Drury continued: "Tomasz's injuries could have been a lot worse, so it's a relief that there's no lasting damage."

The 34-year-old, who also rode for the club in 2008 and 2009, was the Brummies' sixth main signing ahead of the current campaign.

"Obviously we have to consider our options at this stage and we are looking for a replacement, although three-point riders in the Elite League are few and far between," said Drury.