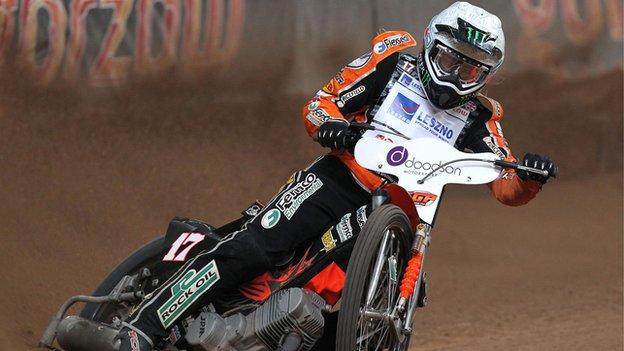 Wolverhampton rider Tai Woffinden is determined to perform more creditably than last time after being called up to fill one of the 15 places in the 2013 Speedway Grand Prix.

Woffinden could only finish 14th when he lined up as a raw teenager in 2010.

"It'll be good to get out there with the top boys again.

"I know how big it is, which is why I'm working very hard over the next four months to prepare for it," the 22-year-old Wolves star told BBC WM.

Woffinden is one of four picks by the organisers, alongside Poland's Jarek Hampel, Slovakian Martin Vaculik and Poole's brilliant Australian Darcy Ward.

And although there are plenty of UK-based performers in the 12-venue worldwide event, Scunthorpe-born, Australian-bred Woffinden will be the only British rider taking part as a full-time member of the Grand Prix series.

After missing 10 weeks of this season with separate scaphoid and shoulder injuries, Woffinden will be taking his preparations very seriously.

"It's going to be hectic," he said. "The first round is in New Zealand on 5 March, 10 days earlier than normal, and there's testing before that, so my season will start in mid-February."

By then, Woffinden hopes that his injuries will have cleared up.

"I rode in Poland the other week with with six injections and could not even feel my shoulder," he said. "Then, five or six hours later, it wore off and I was in agony."

Krzysztof Kasprzak, Matej Zagar and Niels-Kristian Iversen completed the field after clinching the top three places in the Grand Prix Challenge at Gorican on 29 September.

He knows what a big deal it will be for Wolves fans having two riders to watch in Grand Prix action.

"I did a lot of riding in Australia growing up as a kid," he added. "But Wolves, along with Perth, Rye House and Scunthorpe, have been a massive thing in my career.

"They're what made me in Europe and helped me get there."