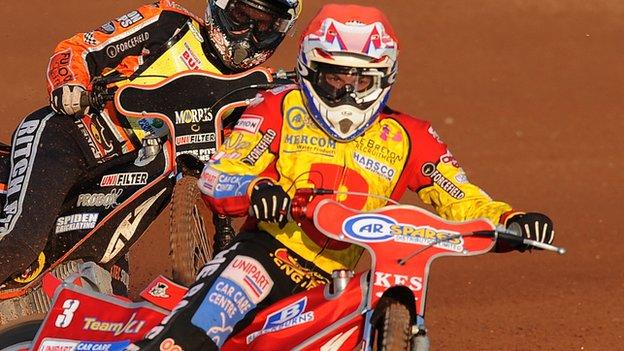 Birmingham are hoping to hang onto Ben Barker following his decision to sign on as Ipswich's number one in the Premier League next season.

Under speedway's current 'doubling up' rules, Barker could still ride for the Brummies in the Elite League in 2013.

But that would be impossible as things stand with both clubs currently staging home meetings on Thursday nights.

Brummies owner Alan Phillips said: "I'm doing my damnedest to keep him on as he's one of our most popular riders."

Ipswich, meanwhile, are delighted by their new recruit.

"I'm pleased to welcome the Premier League's top number one on board," said co-promoter Chris Louis.

"Ben consistently scores big points wherever he rides and is just what we need to head our team in 2013."

Cornishman Barker, who also rode for Plymouth last season, has spent two years as an Elite League rider with Birmingham after signing from Coventry, who reportedly remain interested in taking him back to Brandon.

If Barker leaves, he would follow former number one Bjarne Pedersen out of the exit gate at Perry Barr.

Pedersen's exit came in the immediate wake of Birmingham's failure in the Elite League play-offs after finishing third.