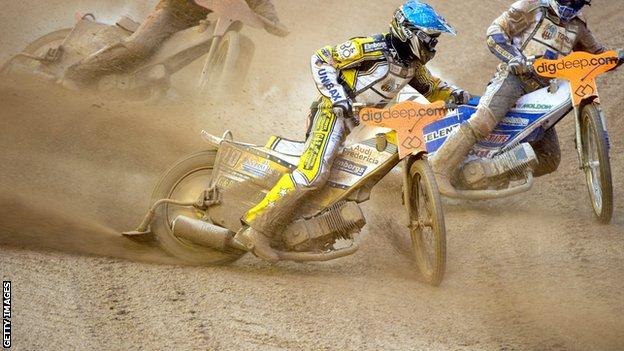 Hans Andersen will return to Swindon Robins on loan from Peterborough Panthers for the 2013 season.

The Robins were keen to bring back their Elite League title-winning captain but Peterborough insisted he was only available on a full transfer.

However, Andersen was allowed to re-sign at Blunsdon after the Panthers signed Kenneth Bjerre on Friday.

"We were given permission to speak to Hans by the British Speedway Promoters' Association on Friday and wasted no time in making contact with him.

"He joins us on loan initially but I would not discount revisiting our earlier offer to purchase Hans as Peterborough appear to want a clean break."

The Robins are currently considering their options to bring back Troy Batchelor, as Peterborough have said he is only available on a full transfer.

And Robins team manager Alun Rossiter said he has been left frustrated with the protracted talks between the two clubs.

"I think this has got personal," Rossiter told BBC Wiltshire.

"Peterborough are quite a wealthy club but as they haven't made the play-offs, maybe there's a bit of jealously as we had two of their riders.

"But we need to forget the arguments and focus on promoting our side's."